‘Everything Everywhere All At Once’ creates a multiverse of fun

The film made by directing duo Daniels explores humanity and love in the most entertaining way. 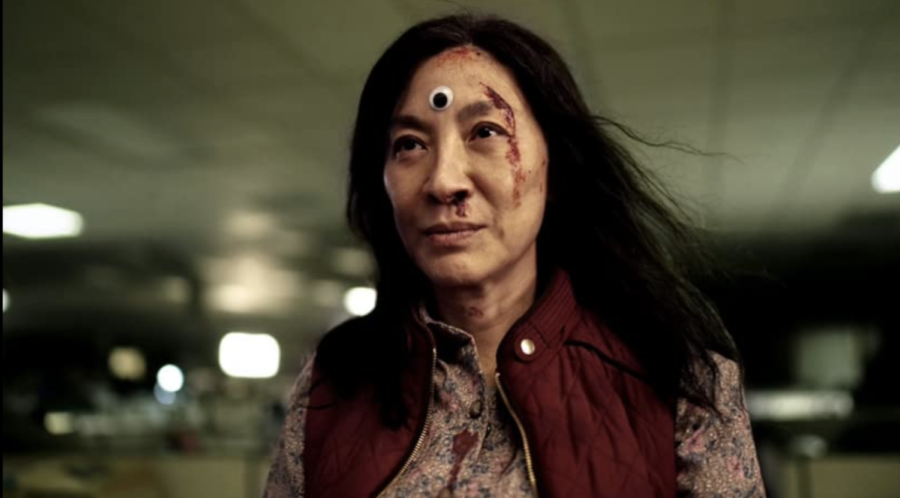 Michelle Yeoh as Evelyn Wang in "Everything Everywhere All At Once" (2022).

Throughout life, an individual comes across billions of choices with billions of outcomes. But what if each decision created a different version of ourselves, one that lives a completely different life in a different universe than our own that we can never see? “Everything Everywhere All At Once” fully realizes this concept in the best way possible.

The film directed by Daniel Kwan and Daniel Scheinert (dubbed Daniels) follows Evelyn Wang (Michelle Yeoh), a Chinese immigrant managing a failing laundromat with her husband Waymond (Ke Huy Quan) on the brink of financial ruin while balancing her marriage and her relationship with her distant daughter Joy (Stephanie Hsu). On her way to meet with an IRS agent, Evelyn is confronted with the truth: the multiverse exists and she is the version of herself that must save the world from the destructive force that is her own daughter. As she works to save the world, she finds a new sense of self-worth and meaning in life.

A real standout in the movie is Yeoh, as she balances playing varied versions of the same person with wit, depth and heart. As a trained martial artist, she fits particularly well in the action scenes but also manages to be absolutely hysterical in comic scenes while also being grounded in the dramatic scenes. Yeoh takes an already great character and elevates her to a new exciting level. Her performance is truly endearing and will certainly win the audience over immediately.

The supporting cast follows in Yeoh’s footsteps and puts in equally amazing performances. Quan, Hsu and James Hong as Evelyn’s father along with Yeoh all have perfect chemistry with each other, creating a family dynamic that feels not only established but lived in. Hsu in particular works fantastically as the foil to Yeoh, gracefully illustrating the complexities of a mother-daughter relationship. Jamie Lee Curtis also turns in a great comic performance as Deidre the IRS agent and full-heartedly embraces the wacky nature of the film.

The strength of the film is its creativity in visuals and plot, which is a necessity in a high concept idea like the multiverse. An idea presented in the film is that Evelyn uses a device to jump into multiple universes where she can use any special talent she has in that universe. With thousands of possibilities found in the distinct universes, Kwan and Scheinert get absurd, presenting strange problems with even weirder solutions. If Evelyn needs to fight a dog owner swinging her dog around on a leash, she accesses the abilities of the teppanyaki chef version of herself to cut said leash. If her hands are restrained, she uses her abilities from a universe where people’s hands are made of hotdogs and they have to use their feet for most things. These ideas are surreal, but extremely captivating, hilariously separating the film from others focusing on the multiverse.

Like their last project together “Swiss Army Man,” Kwan and Scheinert also meet this absurdism with some striking emotional beats. Although the film is disguised as a sci-fi action comedy, in reality, it’s a family drama that dissects cultural, moral, personal and familial values. Tender moments shared between Evelyn, Joy and Waymond are relatable, life-affirming and even tear-jerking. In a film that explores so many different universes, the small exploration of this one family and matriarch is ultimately the most compelling aspect of it.

“Everything Everywhere All At Once” is the most unique and igneous film released in theaters in ages. There is truly no movie like it at the moment and there surely won’t be another one like it in a long while.