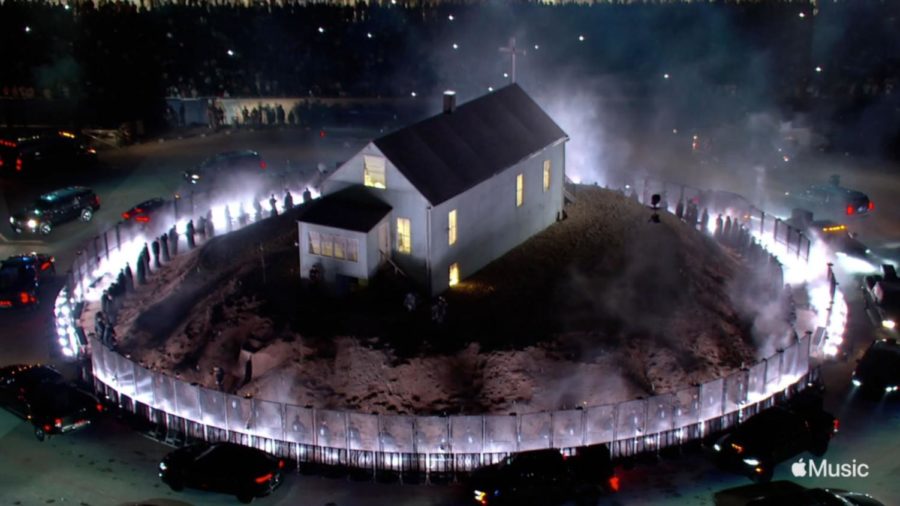 West recreates his childhood home during the final listening party before the release of "Donda".

The album’s title refers to West’s late mother of the same name, who passed away in 2007 due to plastic surgery complications. The record’s creation was a tribute to her, and its contents show West struggling with his recent divorce from Kim Kardashian, and how he has fully committed to his faith even though it has been tested greatly.

Known mostly for his public antics and masterful production, most people have formed an opinion about West whether they have listened to his music or not. This dichotomy has propelled West into a legendary status of celebrity, one which includes showers of praise or complete distaste of his character, depending on who you ask. It is no surprise that the album’s release itself has been riddled with controversies of its own.

Looking past the fact that the album has been delayed for years, Universal Music Group allegedly released the album to streaming services before the original release date without West’s permission. The album also features controversial artists DaBaby, who made homophobic comments at one of his recent shows, and Marilyn Manson, who has recently been the subject of multiple abuse allegations.

Despite all of the controversy and strife surrounding the album, it is a sort of return to form for West. He is not reinventing the wheel for hip-hop like he has done in the past, but rather moving in a different direction, while old glimpses of his past self manage to shine through.

This is of course aided by an all-star cast of features that help the beautiful production shine through. Travis Scott, Jay-Z, Roddy Rich, The Weeknd, Playboi Carti and a handful of other artists help fill out the album’s massive 108 minute run time.

While that number might seem excessive even for a project that has been delayed for so long, something about “Donda” that makes it particularly interesting is that it never tries to drag on a sound for too long, for better or for worse.

A great example is the album’s second track, “Jail,” which features a simple drowned-out guitar riff that permeates throughout the entire track while West sings about his life spiraling out of control. A surprising Jay-Z feature rounds out the song on a somewhat triumphant note.

“Jail” is immediately followed by “God Breathed,” a track filled with low-droning synths and an unsettling chant that proceeds throughout the track, a complete mood shift from the more upbeat “Jail”.

And while the album includes plenty of rapping, such as in “Off The Grid” and “Junya,” it also appears that West has been working on his singing voice extensively. This can be especially seen in “Come to Life,” where West sings about his desire for the chance at another life, and how he should have listened more intently to his ex-wife. His voice is surprisingly well suited for a track of this nature, and the beautiful piano number that slowly builds from beginning to end makes for an amazing display of vocal talent.

“Donda” by no means has a linear progression, and while it keeps things interesting on the first listen, the end result leaves indications of little to no organization on behalf of the record. This can make it difficult for the listener to understand the underlying narrative of the project, which while it partially exists, is portrayed completely out of order or sometimes not portrayed at all.

Despite a strong sense of organization on the tracklist side of things, “Donda” is somewhat of a flawed masterpiece. Many strong ideas were seemingly smashed together and distributed haphazardly across the album. It still is incredibly fun to listen to, and while I highly recommend it, it is by no means West’s best work. The direction he is headed musically is promising, and even at the age of 44, West proves he can still provide the energy and enthusiasm that younger rappers implement in their sound.