‘The Queen’s Gambit’ review: The struggles of a savant 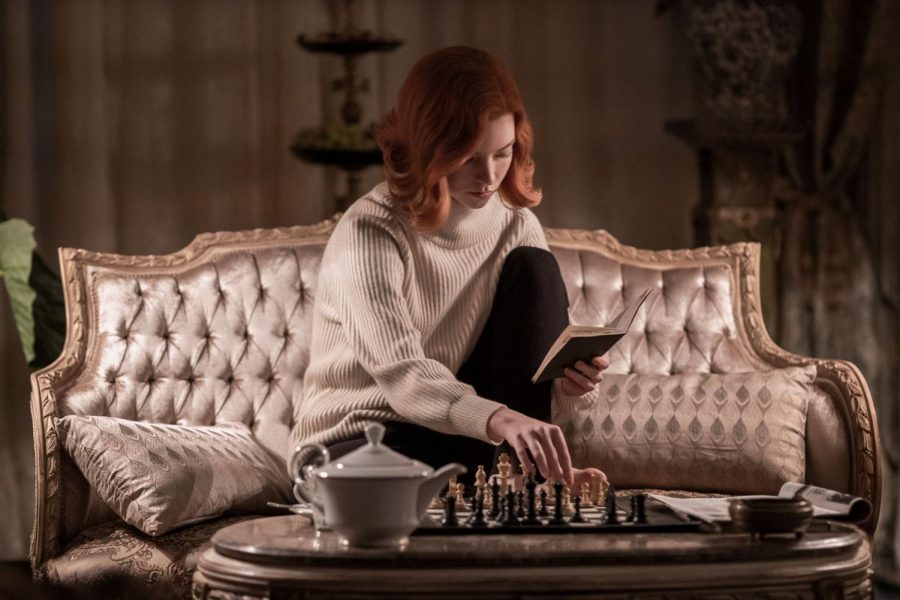 "The Queen's Gambit," starring Anya Tayler-Joy tells the story of Beth Harmon and her rise to fame in the world of chess.

Chess can be traced back 1,500 years when it is thought to have developed in India. Now, it is heralded as one of the most skillful games of competition, with tournaments that boast impressive prize pools. In “The Queen’s Gambit,” chess is the name of the game, but gender equality, alcoholism, and mental illness are the house rules.

The show debuted on Netflix this fall, and has been regarded as one of the most popular of the year. The eight-part series is based on a 1983 novel of the same name by Walter Tevis, and follows the story of Elizabeth Harmon, an orphaned chess savant who struggles with alcoholism, drug addiction, sexism and emotional issues as she climbs her way to the top.

Harmon is played by Anya Taylor-Joy, and despite not being  well known, she delivers an incredible performance. Whether it be the nervousness and tension from an important chess match, the sparse laughter shared with a friend, or the intoxicated slurred words and shaky movements, Taylor-Joy fully immerses the audience. Along with her incredible performance, the supporting actors are just as great, no matter how minor the character. Notable performances include Harry Melling as Harry Beltik, and Marielle Heller as Alma Wheatley. Their characters serve a vital role in Harmon’s development, and their performances are as genuine and believable as Taylor-Joy’s.

The acting would not be nearly as superb if it weren’t for the wonderful writing. Not a single character can be shoved into a single archetype. The writing is genuine to the point that sometimes character actions are unpredictable, but the outcome is understandable. Characters are often witty, cracking jokes that are sure to fetch some laughs when appropriate, but most of the humor is never forced or unnecessary. The serious scenes are excellent, and some of the best in the series. The word tense cannot be understated, as the actors make the audience feel as if the world rides on this chess match, or confrontation, when in reality that isn’t the case.

The cinematography is also fantastic, despite the show being character centric. Director Scott Frank does an excellent job showing the audience rather than telling. Most of the series is shot from Harmon’s perspective in a way that the audience first sees what Harmon would be seeing, before reverting back to a close up of her. This is executed brilliantly, and truly immerses the audience in a story that is already so captivating. Scenes often transition or begin with long takes that have an incredible amount of thought in them, illustrating to the audience how Harmon has progressed from the beginning of the scene to the end.

“The Queen’s Gambit” is a fantastic revival of the 1983 novel, perhaps even better than its source material. While many might find attending a chess match a boring experience, the show demands you live through the tension and suspense. The nerve-wracked faces of opponents as they move each piece across the board will set you up for a satisfying outcome every time.