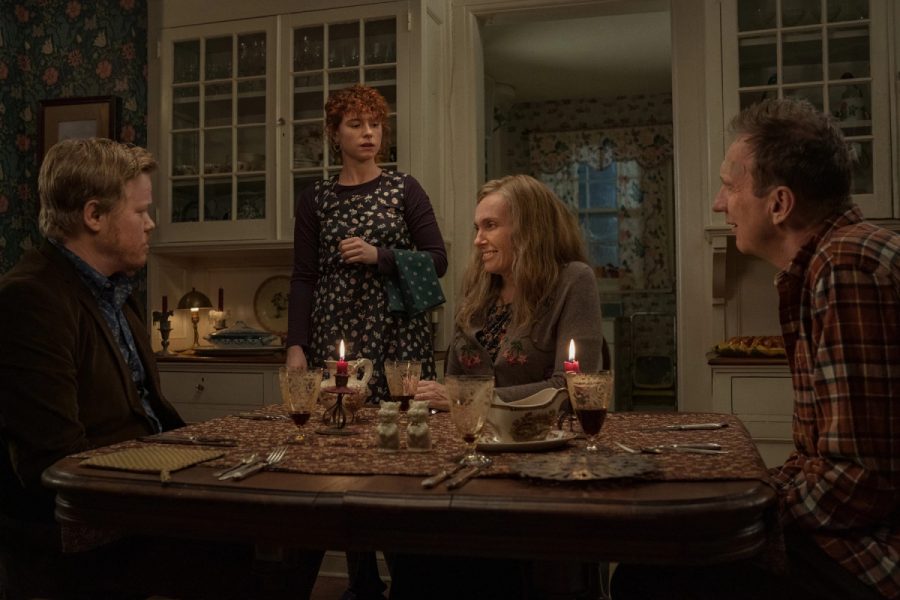 If you’re thinking of ending your Netflix subscription, don’t. The streaming service just released a new horror film written and directed by Charlie Kaufman, and whether or not you’re a fan of horror, you’ll still be a fan of this.

It’s called “I’m Thinking of Ending Things” and the first lines of the film are, “I’m thinking of ending things.” Rarely does a movie start with a character saying the title of said movie, but rarely does a Kaufman movie resemble any other. That’s not to say it isn’t beautifully shot and well acted like many great movies are, but it doesn’t feel like any other movie.

It doesn’t have a clear beginning, middle, or end, many of the shots aren’t clear, considering it takes place in an Oklahoma snowstorm. This isn’t a bad thing though, we live in unclear times, and I think Kaufman has made a movie that encapsulates that, to some degree.

“I’m Thinking of Ending Things” focuses on Cindy, played by Jessie Buckley, and her boyfriend Jake, played by Jesse Plemons. To put it bluntly, Cindy is thinking of ending her relationship with Jake, and it’s very likely she will. But first, she accepts Jake’s invitation to meet his parents, played by Tonie Collete and David Thewlis, on their old, mangy farm. Shortly after their arrival at the farm, Cindy’s experience becomes surreal and even confusing, but it never becomes uneventful.

I liked the movie, I don’t know if that was clear yet. I like how it looks especially. The film’s cinematography fits into a tight box, leaving plenty of room on both sides of your screen. This is not a widescreen movie, it looks like a movie of the past, similar to Jonah Hill’s “Mid90s” or Robert Egger’s “The Lighthouse”.

Both Buckley and Plemons are firing on all cylinders with their performances. Buckley’s character always seems happier to just sit and think in the car, rather than carry a conversation with her boyfriend. She bounces between intimate and personable voiceover work, to indicate to the viewer her thinking, and feigned intimacy and personability in her actual dialogue with Plemons. Plemons character is slightly harder to read. He is always the first one to correct your usage of assertion, letting you know you should have used assertation, and he wants to make it clear it’s Trivial Pursuit: Genus Edition, not Genius Edition. He occasionally slams his fist into the steering wheel in a fit of anger, and the anger feels too intense for the circumstances, but Plemons is such a good actor that you can’t help but believe him.

There were some shortcomings of the film as well. If you are watching this movie hoping to be terrified or have a monster jump out and scare you, then you may be disappointed. This is a subtle horror movie. It always feels eerie, and something always feels off, but it never reaches the boiling point that many other horror movies reach. If you are hoping for some clarity and closure with your characters, then you may be disappointed. I do enjoy Kaufman’s take on films and his ability to completely surprise me and shock me. But there are times where I’d like to understand the film’s last thirty minutes.

If you like Kaufman, then watch this movie, and if you don’t know who Kaufman is, still watch this movie. It looks beautiful on your television screen, it makes your living room into a movie theater. The acting is astounding, and there are more good performances within the film not mentioned in this review. It’s shortcomings are minimal, and are based on my taste as a viewer  rather than Kaufman’s ability to make a movie. This is the kind of film we need right now. I’ve had enough of the comfort TV shows and movies, we need something off-kilter. We need something that respects us as viewers and doesn’t wait for us to catch up to every little plot point. Kaufman doesn’t care if you get it or if you like it, he just makes it. I can’t think of anything better than that.