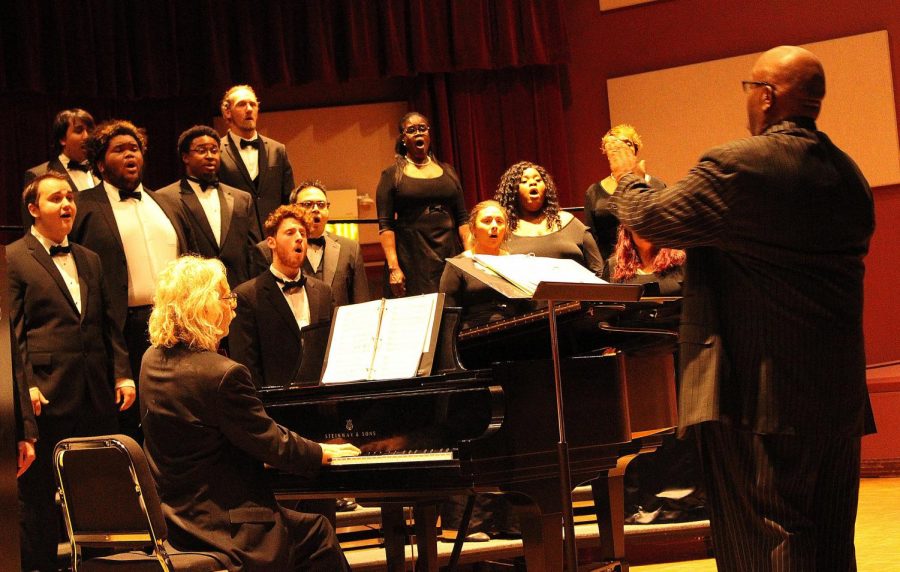 Nerves bundled in the air for performing students as they showcased their vocality in the Choral/Vocal Masterclass Recital Dec. 3 at 7:30 p.m. at the Los Medanos College Recital Hall.

The audience consisted of many students and supporting friends and family members of the director and LMC professor Silvester Carl Henderson. Henderson’s classes were voted the most exemplary program in the state of California.

Henderson’s enthusiasm nature of this for performance and teaching showed through his actions. Whenever a student hit a note properly, Henderson thrust his fits in the air triumphantly.

In his closing speech, Henderson opened up on his life experiences, speaking lovingly with reverence to his students and young people. Henderson stated that his joy and passion in life is “watching young people develop their lives.”

After each soloist performed, special guest and clinician Dr. Chadwick Somers instructed them on how they could improve their singing skills.

The most common relayed message of Somers, operatic Tenor and Doctor of Musical Arts at the Eastman School of Music, was to “sing as if you are speaking.”

One of the soloists, tenor Jonathan Adikins, sang “Will There Really Be a Morning.” Somers directed Adkins to meow to get him out of the habit of singing things too beautifully, so as to create diversity and range so that he could have more expression.

Fellow student Chris Felt also suggested taking introductory music classes, whether they are instrumental or singing basics. Felt discovered his love for music after going back to school. “I just started taking basic music classes and I realized it was something I wanted to do full time.”

Lauren Dunn, a first-time soloist, suggested to beginning or potential singers interested in the class, “Just go for it! There’s people of all skill levels and [Henderson is] here to help.”

Former student Klarisse Tan, a friend of Dunn, described the initial excitement and shock of getting the news that she would have a solo a semester before. “I was absolutely nervous, because I didn’t expect it. I wait to get my critique and then he ended up telling me I was going to perform in the recital, and I just looked like a deer in headlights,” Tan said.

Audience member Naomi Garcia commented, “It was very emotional, especially because everyone did a good job and because the music selection was good.”