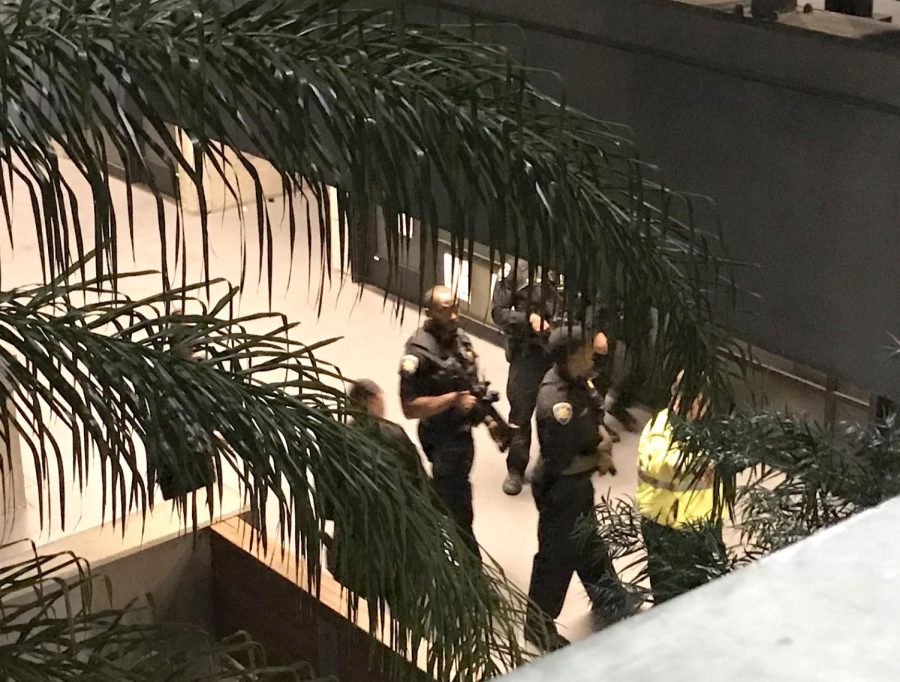 Pittsburg police surveying each floor of the College Complex at LMC.

The Los Medanos College Pittsburg campus went on lockdown at approximately 9:43 p.m. Oct. 9 under suspicion of an active shooter on campus. The Los Medanos College Emergency Alert System sent out a message stating that “there was a report of an armed individual on campus. Police checking the area of the music building. No indication of shots fired. Remain in place until released by police.”

Individuals in the Little Theater were tipped off by campus security that there might have been a possible shooter on campus. Right after the tip, theater students Kayla Martinez and William Thompson went to the Jazz classroom to alert the Jazz class about the potential shooter.

“They just said they were told it could be on campus and we should travel in groups. We finished getting dressed and left behind the theater department right away and came here [to the jazz room],” said student Kayla Martinez.

Drama professor Nick Garcia was among the first to hear about the potential shooter from his students. He was directing play rehearsals at the time, when his students received texts about a possible shooter. He warned others of the rumor shortly after 9 p.m., including the Journalism and Art classes, and then evacuated his students and left campus.

Art professor Eric Sanchez and journalism professor Cindy McGrath called Police Services to ask about the potential threat. Campus police had, at that time, not heard about the reports.

About 40 minutes later, the EMERAlert system sent out district wide texts and emails alerting those still on campus to be under lock down.

“I was in astronomy class. A girl said some guy told her coming from the bathroom that there was shooter on campus and we locked the doors,” said student Aliyah Garner, as she walked back to her car after the alert.

More than six Pittsburg Police Department vehicles were parked on campus and armed officers went to each floor, securing the locations.

“We were rehearsing in the middle of a tune. Those two drama people came in, William and Kayla. William was on text with the police and said we want a police escort out of here,” said jazz professor Steve Ernest.

Ernest shut rehearsal down and locked all the doors and said to his class, “Let’s pack it up and play it safe.”

The lockdown was lifted at 10:06 p.m., after the Pittsburg Police Force and LMC Campus Police secured the area. The Contra Costa Community College District EMERAlert system sent out a text and email stating that, “the shelter in place at Los Medanos College has been lifted. There is no threat or indications of an armed person or shooting on campus. Multiple police agencies are on location to insure your safe departure.”