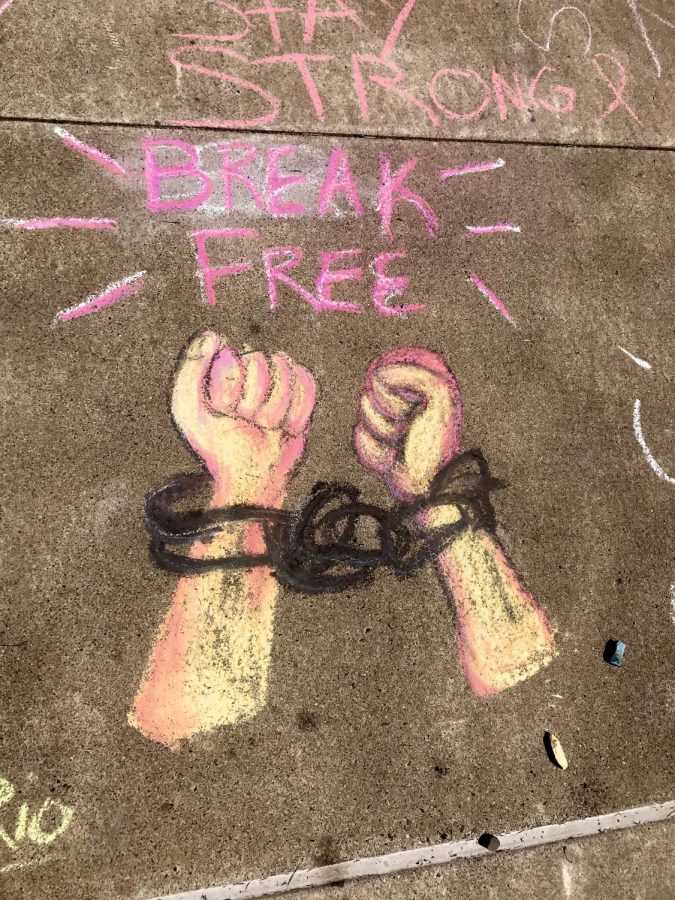 The second annual Chalk Talk was held April 22 in the outdoor quad as a part of Sexual Violence Awareness Week sponsored by LMCAS. The event consisted of five LMCAS students, led by Commissioner of Campus Events Sierra Abel, distributing chalk and free food to any students or faculty that passed by and wished to participate.

“We’re asking people to write a message of support on the sidewalk for the chalk talk,” said Christian Ortiz, a student senator who was helping with the event.

There are a multitude of reasons LMCAS students felt as though this event was worthy of being an annual one, one main reason being the importance of communication and dialogue.

“It’s really good to start these conversations and dialogue, or to just show support on campus because this really happens,” said Abel.

Within the first thirty minutes, the space in front of their booth, was beginning to fill up with colorful chalk messages that said things like; “Stay strong,” “#MeToo,” “You’re not alone,”  and many more.

“I wrote something because I think it’s the little things in life that impact us the most. When people have bad days, it’s typically the little things that help the most,” said student Kelsi Holt, who participated by writing “Keep your head up, babe.”

Along with the free food, there were water bottles, e-alarms, buttons and pamphlets that anyone was allowed to grab from the booth.

E-alarms are devices that hang on a keychain and when a pin is pulled, a loud alarm sounds until the user replaces the pin back where it started. These types of devices are often used to scare off potential threats without getting violent.

“Since pepper spray is dangerous, I have 100 free e-alarms because I wanted to give them something to use for safety,” said Abel.

Turn out seemed to be mostly women, as men seemed uncomfortable with the topic of conversation and interactive nature of the event.

“People are uncomfortable about the topic, that’s why it’s so important,” said Abel.” I wanted to start a conversation, to create a community and allyship between faculty and students and to promote things like our help centers.”

Participants filled the sidewalk in the outdoor quad with color and words of support for anyone who may have needed it.

“I wanted to encourage others, to let them know that there’s support out there for the people who need it,” said a bystander who wished to remain anonymous.

Others found the experience of drawing with chalk helpful for themselves rather than just helping others in supportive messages.

“I’m a survivor and I chose to stand. I want to support others because I didn’t have that in my time of need,” said La Tausha Wade. “People don’t come forward because they don’t feel they’ll be believed. ‘We believe you,’ that’s a love note. That’s a powerful way to love. This was just really therapeutic for me.”