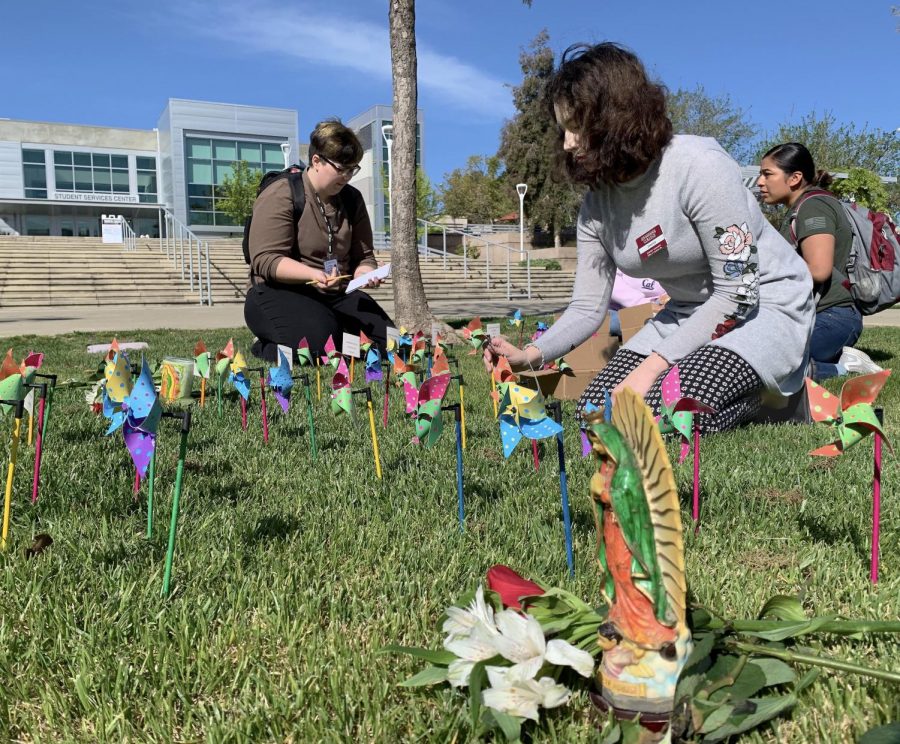 A small but powerful memorial was held Wednesday, April 10 in the outdoor quad to bring awareness to the students lives lost in school shootings over the past few decades. The event was one of many put together for Active Shooter Awareness Week.

Major school shootings from across the nation ranged from 1996 to the most recent of 2018 were posted on small signs with bright pinwheels placed beside them. Each pinwheel represented one life taken from each shooting. The lowest was one death, the highest was 32 deaths.

The spinning brightly colored pinwheels attracted a lot of attention from students who walked by.

“I was really shocked to see it with my own eyes, I knew about these events but I hadn’t seen the deaths like this before,” said  Demitri Montoya, a bystander who stopped to look at the pinwheels.

Many were left feeling the grave reality of what each pinwheel represented, though they felt it was needed on campus.

“People need to take into consideration what they’re seeing and realize that it’s happening everywhere,” said Teyah Brown. “People should be aware, it’s so sad that it’s going on a lot.”

Even though no shooting has happened at LMC or the other local schools in the area, many people are still worried about the possibility of it happening.

“I am fearful and conscious when I’m on campus that it could happen. I stopped going to concerts and places with large crowds because of that fear,” Brown said.

There was a booth that supplied free waters and buttons with volunteers advocating the “run, hide, fight” mentality, in the case of being confronted by a shooter.

“I started planning this week back in October. I was concerned when I was a freshman that there’s not much awareness about this topic. Now as a sophomore, I really wanted administration to take this into consideration,” said Esperanza Rojas, an outreach officer for the Honors Program.

Staff and faculty are trained for some emergency situations but students are not, said Rojas, leaving the training to be less effective.

“I was really anxious on campus,” said Rojas “What’s the point of faculty having training if students aren’t trained?”

Administration was supportive of this week being advertised and taking place on campus.

“I’ve received really good comments. Bob [LMC’s President] congratulated me, but I feel like I’m doing admin’s job. Like, thanks for the congratulations but this is your job to do,” said Rojas.

The event was created due to what some believed was a lack of action on administration’s part. Rojas put the week together herself and executed it with the help of volunteers.

“I was interested in helping out because schools don’t talk about this enough. It’s good to talk about it,” said LMCAS Treasurer Jessica Wilson.

Along with the booth was a small table with two officers ready to answer questions and promote campus security.

“This is a good way to get people involved and aware in the case of an emergency. It’s a good way to learn how to prevent something from happening,” said Samuel Perez, a campus police officer.

The reaction to this event and the full week itself has remained positive.

“This being a student run thing just shows how we give a lot of freedom to better the community, to make improvements,” Perez said.

Due to turn out not being as high she had hoped, Rojas has been thinking of continuing this event until administration does something differently.

“I’m planning on doing this again. I know what the ups and downs are now,” Rojas said.