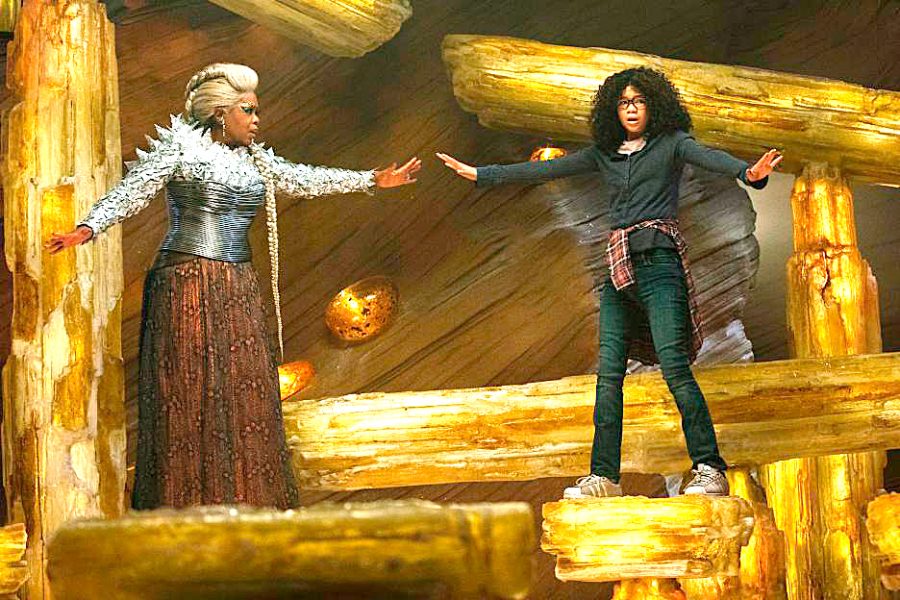 Ava DuVernay’s film adaptation of the science fantasy novel “A Wrinkle in Time’” is packed with profound emotion and stunning visuals that capture the story’s theme of loving and accepting who you are, as you are.

“A Wrinkle in Time” tells the story of a young girl’s journey to find her father who disappeared into the depths of the universe for four years. With the help of three celestial beings, her younger brother and a new friend, protagonist Meg Murry (Storm Reid) discovers more of her own capability on this interplanetary adventure than what the universe has to offer.

DuVernay encapsulates the story’s message of overcoming self-doubt and insecurity by having each of the vibrant and versatile characters leave an impact on one another with each of their interactions throughout the film.

When viewers are first introduced to Meg, it is clear that her father’s disappearance has taken a toll on her confidence. From there, we see how each interaction she has with someone, or something, is a step toward her gaining the confidence she believed she would never have.

There’s a scene in “ A Wrinkle in Time” when Meg and her friend Calvin (Levi Miller) are in her backyard and he expresses fondness for her natural, curly hair and she tells him her hair isn’t beautiful and for him to stop saying anything about it. But when Calvin continues complimenting Meg on her hair throughout the film, she stops trying to fight it.

At first it may seem like she only learned to love her hair because a boy is telling her how beautiful it is, but when watching their scenes together, Calvin only ever complimented Meg about her hair after he spoke highly of her intellect and personality.

These interactions also followed pivotal moments that played a role in Meg’s own realization regarding how amazing she is — his compliments only really acting as a measurement of Meg’s growth as the more she confidently accepts what he says.

But it’s the Mrs. and Meg’s internal conflicts throughout the film that truly play an essential role in her self-discovery.

A film could not get any more inspiring than having celestial being Oprah descend from the sky just to tell a young black girl she is smart, amazing, beautiful and above all, a warrior.

Each time Mrs.Which (Oprah) and Meg shared a scene together, their chemistry only heightens the intensity of the moment. Each scene with these two was filled with overwhelming emotion and the dialogue between them seemed genuine, as if Mrs.Which had been waiting those four years to share her wisdom and words of encouragement with Meg.

There is also something about Oprah’s voice and presence that speaks to an audience beyond the screen. Although Mrs.Which, was directing all the acclamations of self-love and believing in who you are to Meg, every time the camera panned to her face it felt like she was sharing those words with me.

It is in these scenes with Mrs.Which that took me back to when I was Meg’s age, feeling as if the world was against me and that I would never figure out what I’m meant to do or who I’m meant to be. I wish I’d had my own Mrs.Which to tell my younger self I could do anything as long as I believed in who I am.

This relatability may not have been as successful as it was if it weren’t for DuVernay’s casting choices. The chemistry between the actors and their strong character performances carry the best parts of the film.

Do not go into “A Wrinkle in Time” expecting this film to be anything more than a Disney movie. The film’s storyline fits in with Disney’s dream big, be inspired propaganda and the targeted audience members are clearly young adults.

That’s not to say there haven’t been Disney films, especially in recent years, that adults related to and found awe inspiring, but “A Wrinkle in Time’s” film adaptation is an all around feel-good movie — it provides comfort and nostalgia for those who found security in the book or who remember what it’s like to be 14.

To genuinely understand “A Wrinkle in Time’s” importance, putting yourself back in the shoes of your 14-year-old self helps.