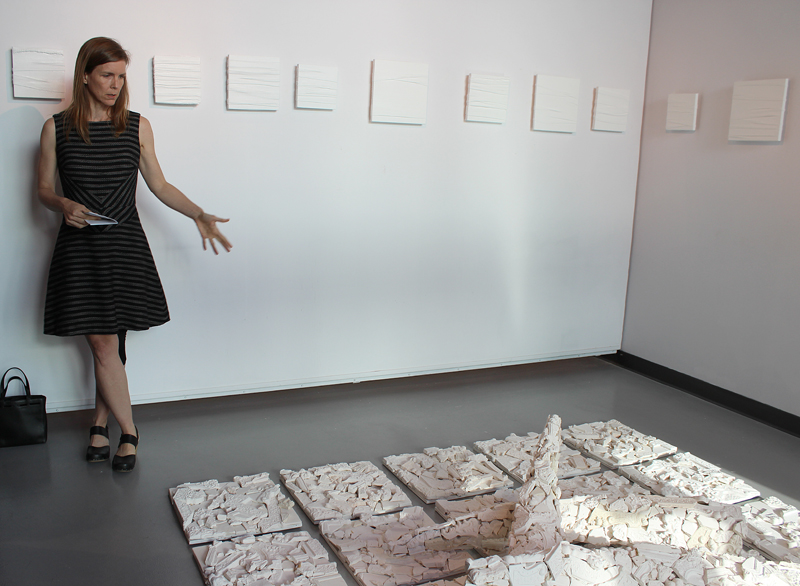 Striking red and white instillation art pieces revolving around poaching were unveiled in the art gallery. These pieces use a variety of mediums to convey the same message, all of which promoting animal activism.

Artist Karrie Hovey’s instillation “Menagerie” opened Sept. 26 to the public, with a discussion involving the artist herself. Hovey explained how everything from the color and medium, to the arrangement conveyed meaning in her pieces.

The gallery was packed with students wanting to see a renowned artist discuss this ambitious exhibit.

The first piece one is likely to see, “Kaleidoscope,” a circular arrangement of butterfly sculpture on the wall. It takes a minute to identify the pure white butterflies, which reinforces the instillations use of color and its theme of wildlife being obscured.

One piece, “[Trans]act” consists of several silk rhino horns arranged in neat rows.
“It deals with rhino horn and rhino poaching but it also deals with dot painting,” said Hovey, “the horns are made of silk because it refers back to the Silk Road and colonialism.”

This striking peace dominates the wall behind the centerpiece of the first room, “Man.I.cure,” which is a large felt rhino on a red platform, complete with red threads coming out of the horn.

Hovey explained that the name refers to both how rhino horn is made of keratin, the same material that makes up finger nails comparing the poaching of horns to a macabre “manicure” as well as a reference to rhino horn’s popularity as a bogus medicinal cure.

Beneath the piece lie several teacups, a reference to the Chinese and their status as the largest importers of rhino horn.

The entry to the exhibit also features “Catch,” which is a large net with red specks made of plastic bags, focusing on how plastic waste is decimating marine life.

The second room continues the striking white and red theme with an installation called “Trophy Room” that features several pieces, including the enigmatic wool piece “Pangolin,” which has a shape that is intentionally vague, resembling a curled up, spiny, pangolin.

“Pangolins are poached for their scales, for ornamental display, for medicine, and pangolin meat is also a delicacy,” said Hovey.

Hovey held a Q and A after he explanation of the exhibit.

“There is very little random in my work,” said Hovey emphasizing her careful approach to everything from placement of pieces to medium used.

Hovey graciously fielded around a dozen questions from the students about a number of topics before closing out her tour of her work.

Hovey encouraged students to educate themselves about issues of poaching and animal trafficking as well as directing them to Project Thorn, a rhino conservation organization.

Among the students in attendance was Adrian Montemayor.

“She is very dedicated with the amount of time she put in,” said Montemayor adding, “It is amazing.”

Also viewing the opening was student Jennifer Holderman who was particularly fond of the piece “Pangolin.”

“If you don’t know what it is, you have to go look it up,” said Holderman, “I like that the artist is so friendly and answers so many questions.”