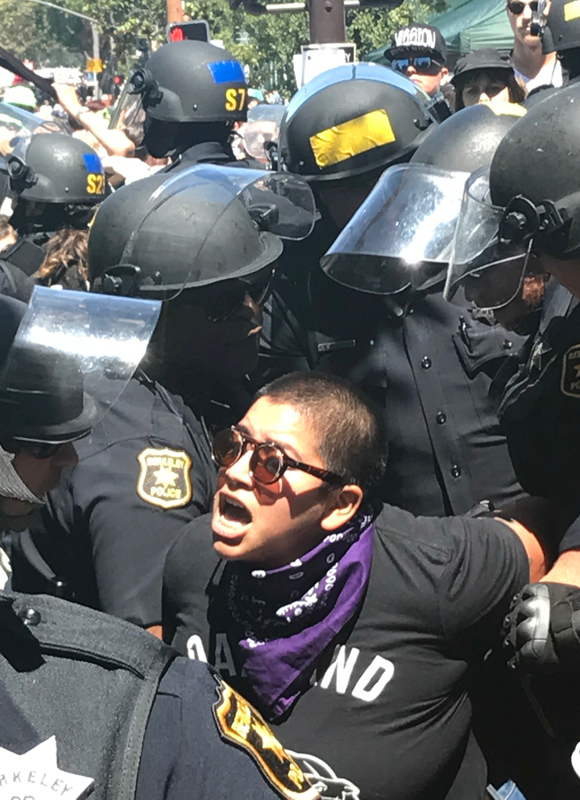 Berkeley protestors took to the streets in opposition to the right wing “No Marxism” rally Sunday, Aug. 27 in a mostly peaceful manner. The vast majority of protesters did not resort to violence, however, a few incidents did occur between protestors and police, as well as with the anti-fascist organization Antifa.

The “No Marxism” rally was met with intense controversy, not just because of its location in Berkeley, one of the most liberal cities in the United States, but because of the recent the Charlottesville march that attracted neo-Nazis and members of other white supremacist groups.

Partially due to its controversial, and possibly dangerous, nature, the attendance of the “no Marxism” rally, along with the similar, San Francisco based, Patriot’s Prayer, were heavily reduced. Beyond the police checkpoint there were fewer than ten members of the conservative group.

Chief among the right-wing protesters was Arthur Schaper, a conservative blogger and adamant supporter of Trump. Schaper attended the rally draped in an American flag and engaged with several of the protesters, on topics ranging from unions to class disparity.

“It’s getting to the point where workers are making more than the bosses,” said Schaper to an exasperated crowd of protestors.

Shaper was joined by Erin Smith, a transgender woman, along with several people of color such as the young Sam Hyde.

Iris Archuleta, a professor of political science at Los Medanos College and lawyer, commented on the unusually high number of people of color and trans individuals in the right wing rally.

“There is a social and psychological response called stereotype threat,” said Archuleta.

He explained that stereotype threat is a situation in which members of an oppressed group align themselves with their oppressors in order to gain favor with them.

Nicki Miller, a member of Communities Against Racism and Fascism, led a small group of eager protesters. Miller said her group’s goal was to “get the fascists out of the bay area.”

Miller continued, “Berkeley is a battle ground for them, this is a stunt.”

As more and more protesters poured into the park, Schaper’s crew exited the park surrounded by protesters shouting things like “Nazi scum off our streets,” and “down with white supremacy.”

It was at this time that the arrests began, several left wing protesters were detained by the police, including Yesenia Mendez. Mendez, and her service dog, were mobbed by police drawing boos and shouts of outrage from protesters.

Shortly after Schaper’s exit, a surge of members of Antifa overran the police barricade and a few members chased down stragglers from the “No Marxism” rally.

While the bulk of Antifa did not resort to violence, some members did assault people, beating them with sticks and throwing punches. Most of these incidents happened on a side street, away from the bulk of the protest.

Among those beaten was NPR host Al Letson, who dove on top of a Trump supporter to protect him. Then members of Antifa surrounding Letson continued to beat the supporter and Leston until bystanders intervened.

These actions, however, drew the attention of police who fired tear gas and advanced in a human wall towards the protesters.

Despite the scattered incidents of violence, the bulk of the rally was quite peaceful, nobody was killed or even hospitalized, and only thirteen individuals out of the nearly 7000 in attendance were arrested.

While both the police and Antifa did resort to violence at times, it was relatively minor. The bulk of Antifa did not use physical force and police also minimized unnecessary altercations.

Both the police and Antifa refused comment at the protest.

Berkeley resident Genoise Hunter was grateful to the protesters in the park opposing white supremacy. “I grew up with restrooms that said colored,” said Hunter, “I had to pay ten cents to get in a semi clean restroom.”