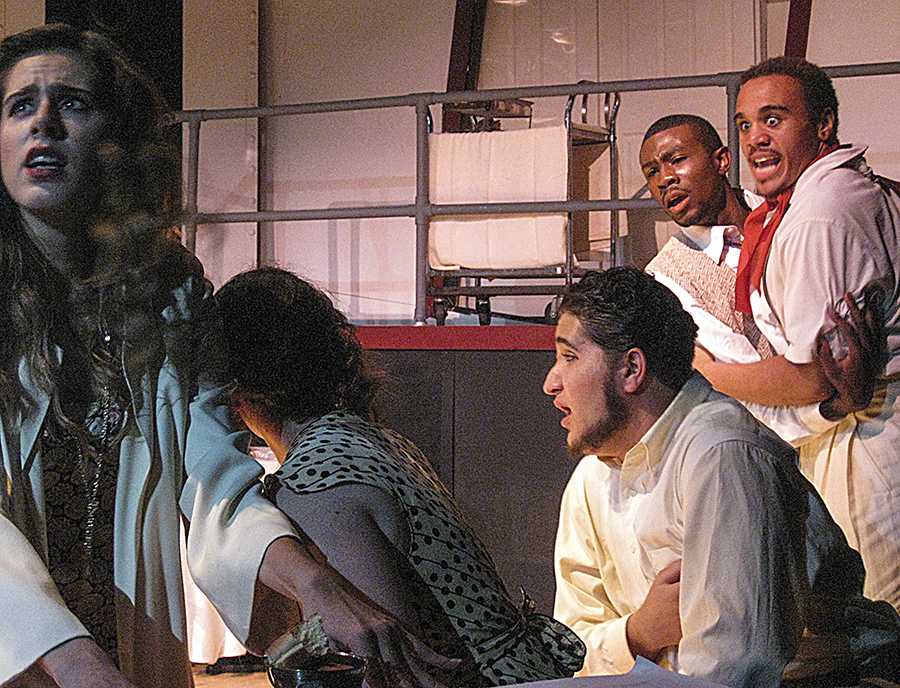 The Los Medanos College Drama Department is presenting its adaptation of “Rough Crossing” — a play written by British playwright Tom Sheppard — in the Little Theater during the middle weeks of October. The play is directed by LMC Drama Instructor Sean J. O’Neil and performed by LMC drama students.

The story revolves around main characters — Sandor Turai and Alex Gal the co-writers of a musical comedy, composer Adam Adam, who is good friends with Sandor, Actress Natasha, who is Adam’s lover, actor Ivor who has past relations with Natasha, and Dvornicheck, the server on the ship — who go through various challenges to make their work performance-ready.

The story takes place on a boat called the S.S. Italian Castle, on which the crew is traveling across the Atlantic Ocean as the show progresses.

While the Natasha and Ivor are already on the boat, Sandor, Alex Gal and Adam, come aboard to present their new musical piece to the actors. Ivor expresses his love to Natasha, clueless to Adam, Sandor and Gal, who overhear his confession from below deck, complicating the story further.

Adam’s character, played by Devin Williams, has a speech impediment that causes him to freeze before he speaks. When a character asks him a question he looks at them with his mouth open and tries to get the words out. Adam’s impediment gets worse when he hears Ivor trying to woo Natasha. Adam is heartbroken and discouraged to the point where he wants to quit the show.

Sandor has to persuade him to stay despite his loss, as well as coming up with a solution to their problem with the help of Gal.

The acting performance by Mario Castillo, who plays Sandor, is great in that his facial expressions are strong and sell his emotions. He faces big ups and downs as a character and it shows throughout the play, as the audience witnesses the transformation of a writer who has everything working, to losing it all and solving the problem.

Although the cast is small, the actors shine and their differences are clear; not only did Castillo do a stellar job, the rest of the cast was up to par.

At the performance Saturday night, all the cast members appeared well rehearsed and comfortable with one another.
The lighting emphasized the characters during certain moments, and overall it was a soothing light set up.

The timing of the lines delivered was crisp and realistic. For example, in one scene it seemed as if two separate conversations were going on.

Gal talked on the phone while Sandor and Adam carried on a conversation in the same room. As Sandor asked Adam a question the pause was filled by what Gal was saying on the phone. Then as she pauses waiting for an answer on the line, Adam replied to Sandor. Despite its two-hour length the flow of the play is fast pace and inviting.

The set design is clever, and it actually looks like a ship. There is a point in the play when the boat starts encounters rough waters, making the ride shaky, and the set moves back and forth as the actors struggle to keep balance.

The performance excels in the acting, by taking charge of the stage the actors are able to sell it. It takes you away from what is going on; you feel distant from the world but close to the show, it is captivating.

The actors do a good job of being in a separate world, both in the sense of on a stage, but also at sea. They are convincing in their actions and are engaged in one another.

And because they are at sea with few people, you can watch the tension rise. There is nowhere to go, they are forced to deal with their problems. A boat filled with co-workers is certainly no cruise.

The play is unique and provides an escape from reality. And while there is some comedy that one might not completely understand, the actors’ performance makes it up, along with the drama as the story unfolds.

The show will end its run with final performances today, tomorrow and Monday at 8 p.m. General admission is $10, students $7.