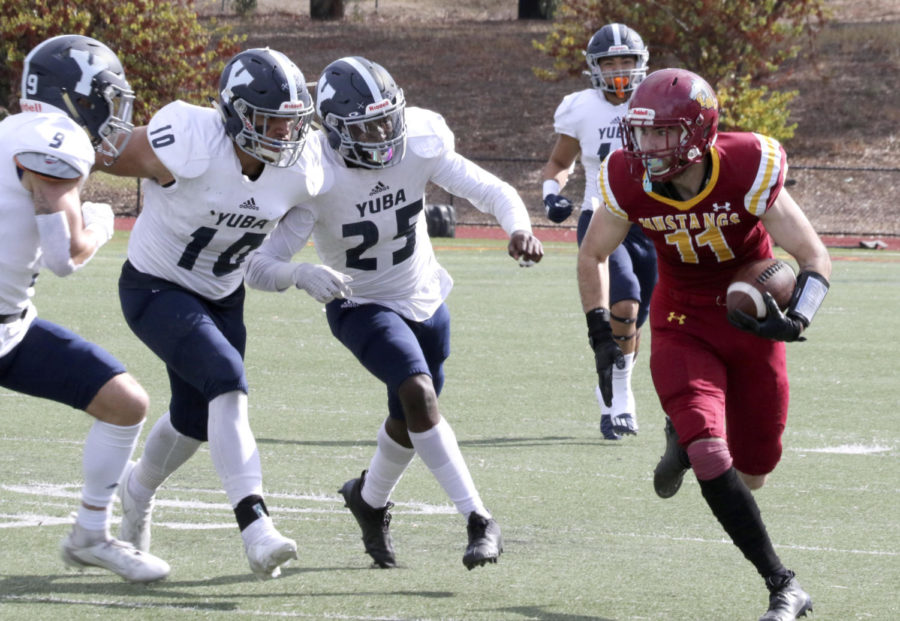 The Los Medanos College Mustangs defeated the Yuba College 49ers 31-10 in a scrappy, penalty-ridden game at home on Oct. 30.

After opening the second quarter with a few handoffs, quarterback Jaylen Tregle burst outside of the pocket for a 62-yard run. But after two dropped passes and a handoff for neutral yards, the Mustangs were forced to kick a field goal, where kicker Isaiah Apostol put the Mustangs up 10-0. The next few possessions were once again controlled by the defense, with neither team able to advance further than midfield.

With about 5 minutes left in the second quarter, the 49ers had called in the punt team after being forced into a 4th down situation. Just before the kickoff, however, a member of the Mustangs defensive line jumped, causing an offsides penalty. With this momentum, the 49ers had a chance to score, eventually settling for a field goal, making the game 10-3.

With around 2 minutes and twenty seconds left, the Mustangs were poised to score again. And after getting excellent field position from the returned punt, Tregle found his favorite receiver of the day Brian Cruz, who sprinted past the 49ers secondary for a 67-yard touchdown, making the score now 17-3.

The Mustangs received the ball at the half but failed to convert a third and 12. The 49ers’ offense was stagnant after the half, mainly due to the Mustangs’ defensive line so easily penetrating the backfield. Defensive lineman Josiah Barnett and Linebacker Enele Amituani both recorded back-to-back sacks on consecutive 49er possessions, forcing them to punt both times. After receiving an off-target pass near the end of the third quarter, a Mustangs player found himself on the 49ers sideline, where a brief verbal confrontation occurred. The result was both teams receiving offsetting personal foul penalties.

With 9 seconds left in the third quarter, the Mustangs’ offense had found themselves on the 49ers’ thirteen-yard line. Tregle once again targeted Cruz in the back of the endzone, but the ball was deflected by a 49er safety. After the ball floated in the air for a moment, it slid directly into Cruz’s hands to put the Mustangs up 24-3.

The beginning of the fourth quarter mirrored what the game had been up to this point, a scrappy defensive battle that resulted in possessions constantly changing hands. The 49ers finally had their opportunity to score, with their quarterback Kyle Hughes finding a receiver on a screen route, who took the ball twenty-one yards to the endzone, making it a 24-10 game. But the Mustangs were ready to put the dagger in, mounting a quick and clean drive that ended in another Tregle touchdown, but instead of Cruz it was wide receiver Matt Quesada putting the nail in the coffin, creating a final score of 31-10 Mustangs.

Despite the high score on the Mustangs side of things, the number of penalties halted the Mustangs’ offensive advance multiple times, not to mention the sideline altercation earlier in the game. Mustangs head coach Chris Shipe put an emphasis on the players controlling their emotions.

“Football is an emotional game, and we need to make sure that we control what we can after the whistle blows,” said Shipe.

With the win over Yuba, the Mustangs have now won 4 of their last five games. Quarterback Jaylen Tregle commented on the team’s recent success:

“Considering we were the underdogs, I think we played very well. Even though our enemies think we’re under capable, we’re only getting better each week. We’re only growing,” said Tregle.

The Mustangs head to Los Altos to face Foothill College on Saturday, Nov .6 at 1 p.m.