A tight and intense fourth-quarter results in victory for LMC. 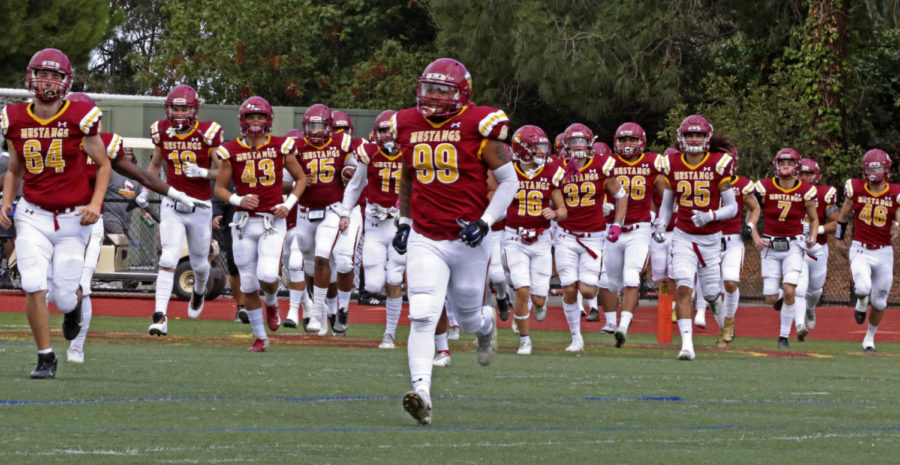 The LMC Football Team arrives readied onto the LMC field for a game against DeAnza College.

Quarterback Jake Byrne came out in the first quarter with a lot of energy, starting off with two handoff plays before throwing consecutive completions with a toss to wide receiver Matt Quesada who juked the defender, getting an open lane for the touchdown and giving LMC a 7-0 lead in the first three minutes of the game.

Unfortunately for LMC though, De Anza had different plans and converted an interception to a touchdown, tying the game in the second quarter. Then a successful field goal attempt gave De Anza the lead by three points.

Things got even worse for LMC in the third quarter as quarterback Jaylen Tregle got sacked and then fumbled the ball at the Mustangs’ own 4-yard line. The ball was recovered by De Anza, which took advantage of the situation and converted it to a touchdown in the following play. A successful extra point gave the visitors a 10-point lead and the scoreboard read 7-17.

But LMC got some revenge as wide receiver Brian Cruz brought in a one-handed catch and proceeded to carry the ball for a 37-yard TD to narrow the gap. A successful extra point brought the score to 14-17 and put the game within reach.

The fourth quarter was a heart-stopper as Cruz delivered another TD to take the lead. De Anza responded with another touchdown of their own, retaking the lead 21-24.

With around one minute left on the clock, Tregle completed a long pass to Quesada, who was tackled near the end zone. LMC’s next play got the ball in the endzone for a touchdown, swapping the lead once more. The extra point put LMC ahead of De Anza 28-24.

The remaining plays included an impeccable defensive stop by the Mustangs and an interception which ended up being the final nail in the coffin for De Anza.

After the nail-biting victory, quarterback Byrne commented on the role fans can play, especially when a team is in a tug of war.

“Fans for sure give a lot of momentum during the game,” he said. “We definitely feed off the fans.”

If you’re a football fan, consider giving the Mustangs more momentum Saturday, Oct. 30 when they will meet Yuba College at home at 1 p.m.