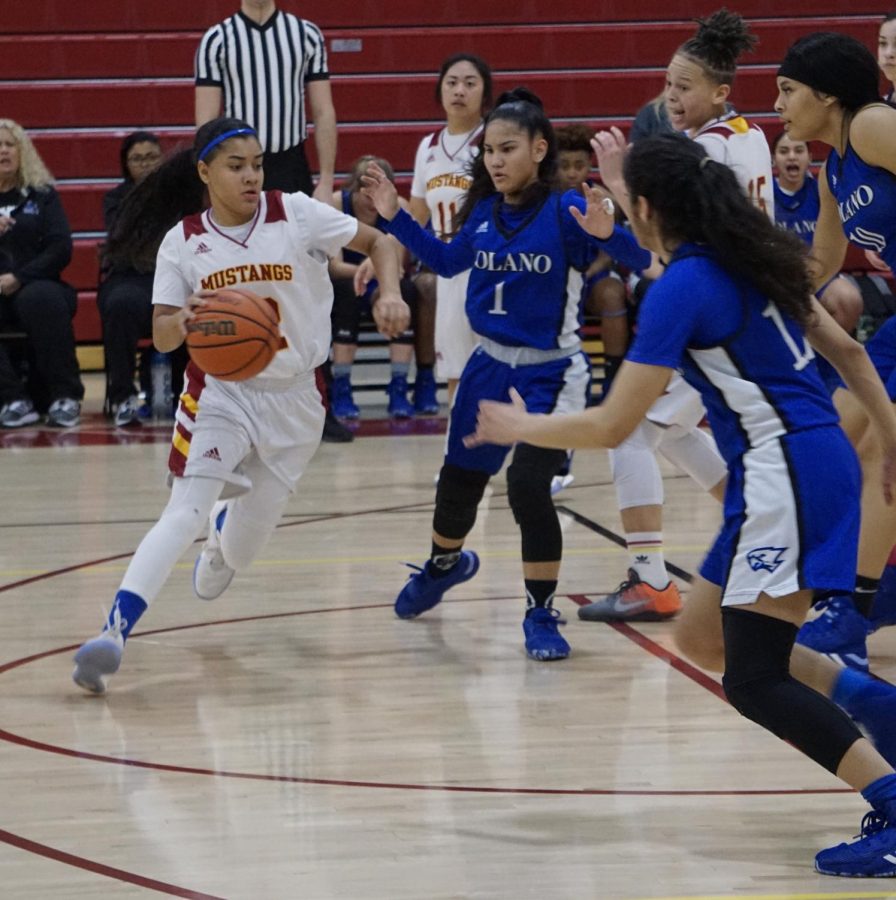 Jeannette Luna, No. 12, attempts to dribble through the Solano College Falcons in an attempt to score for the Mustangs during a women’s basketball game at Los Medanos College in Pittsburg, Calif. on Jan. 31, 2020.

The Los Medanos Women’s Basketball team hosted the Solano College Women’s team in a 42-74 defeat. The loss changed their Bay Valley Conference record to 2-7, and their overall record to 4-16. The Mustangs sit in the bottom half of the BVC standings, and are on a two game losing streak.

LMC played the game with a short bench, only two players were available for substitution. This caused the Mustangs to struggle both offensively and defensively. They committed 19 turnovers during the game against the Falcons.

From tip-off the Falcons dominated the Mustangs, outscoring LMC 16-8. LMC had many chances to score, but the ball would hit the rim and bounce out instead of going into the hoop; this was the story of the entire game.

The good run didn’t last long for LMC, who allowed the Falcons to score seven points with three minutes remaining in the quarter. The Mustangs went into half-time trailing Solano College 23-32.

During this quarter LMC had many opportunities to score from the free-throw line. Ke’ara Perkins was one of six from the line. Jeannette Luna converted three of four free-throw opportunities. The Mustangs continued shooting free-throws and field goals, but could not get the ball to go through the hoop.

During the fourth quarter LMC’s offensive ability returned, scoring 13 points. The Solano College Falcons were able to score 16 points during the quarter. The final score was 42-74. Jeannette Luna led LMC in points during this quarter with six points. Arianna Farinas stepped up to the free-throw line and made all three attempts from the line.

The Mustangs continue BVC play at LMC Friday Feb. 7 against College of Marin with tip-off scheduled for 7:30 p.m. Admission is $6 for adults and $3 for students. For more information on LMC Women’s Basketball, visit https://www.losmedanos.edu/basketball/womens/index.aspx.