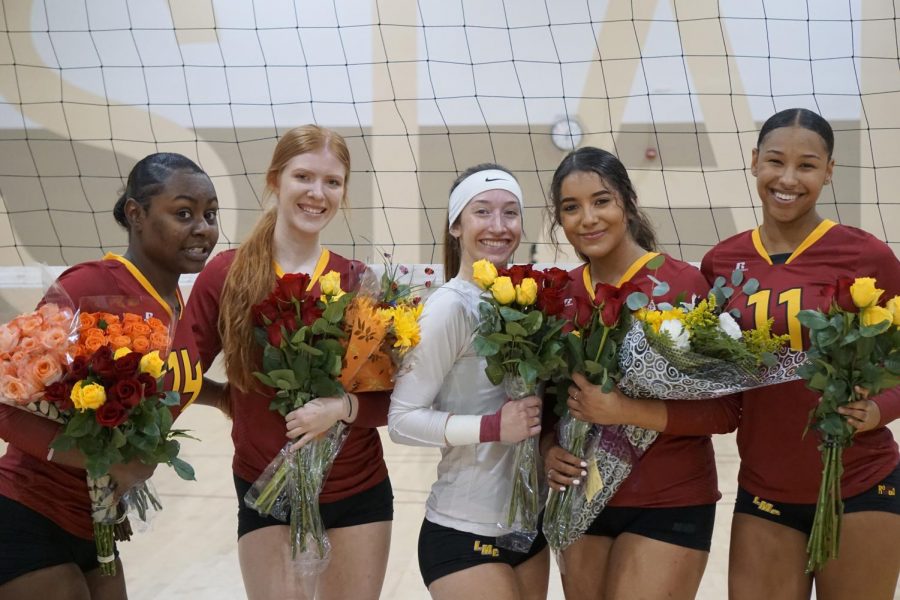 From eft to right, Jazlyn Avelino, Emily Sobolik, Joslin Sadler. Kristina Salazar, and Amaya Mixon pose for a photo during a pre-match ceremony during their final home game as Mustang volleyball players.

The Los medanos College Mustangs, who entered the playoffs as number 19, suffered their playoff loss against Butte College which was number 14 losing it 3-0.

In the beginning, the match was close and intense with every player playing at the top of their game but ultimately Butte College college was the team that fought harder with them winning the first set 25-21.

With the start of the second set on its way, the momentum was completely taken away from LMC by Butte College. LMC had started to build more and more errors within the team due to having some miscommunication trying to comeback from the Roadrunners constant scoring but ultimately Butte College won the set 13-25.

On the third set it was more of the same from the last two sets with Butte college dominating and starting off with the advantage early and making the Mustangs play catchup, Butte College won the third and final set with an easy 11-25.

A couple of Mustangs that had a stellar game were No. 9 Emily Sobolik who had an outstanding playoff stateline with 10 digs, 7 kills, and 32 TA’s, another player that had played well was No. 11, Amaya Mixon with 24 TA’s, 11 digs, and 4 kills.

The last conference game was played against Solano College and the Mustangs lost that game three to none.

This season the Mustangs had promised themselves to set a goal to be the first LMC women’s Volleyball team to win a playoff game.