Football season comes to an end 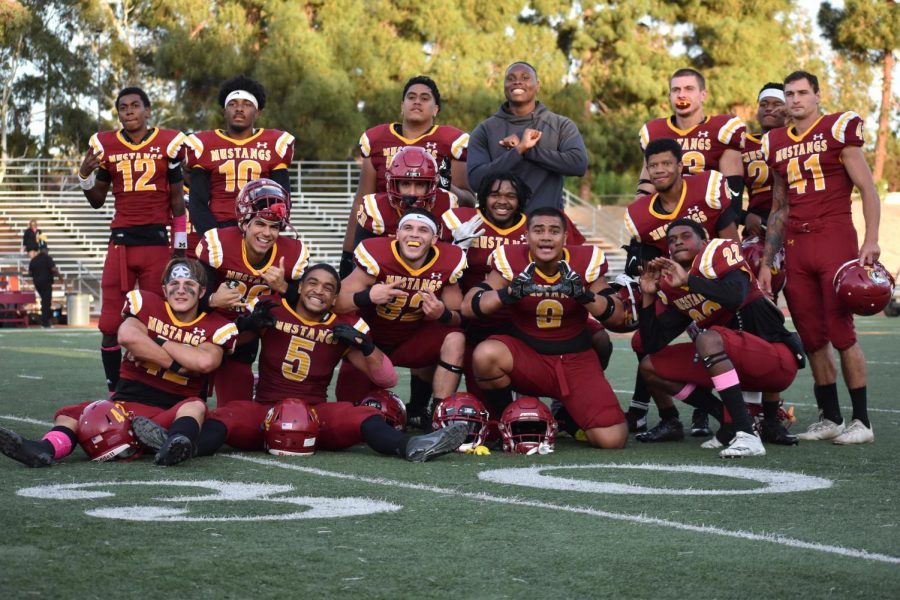 The LMC Football team celebrates after a 14-10 win against College of the Redwoods on Saturday, Oct. 20, 2019.

Los Medanos College had a tough start to its season after finishing preseason 2-1 but what the rest of the season entailed was a roller coaster ride of ups and downs.

The Mustangs finished Pac-7 conference play with a 3-2 record, 4-6 overall, this is an improvement on last years 1-3 Pac-7 record.

One of the Mustang’s biggest strengths was their defense, which was noted by Heamasi Latu.

“LMC defense is the best in JUCO [junior college], and we all consider each other lions because we dominate our opponents together,” said Latu. “We are a scary sight and we proved that the entire season.”

“I wanted to lead the team in tackles and interceptions, but ultimately get offered after the season. I was tied for the leading interceptor on the team with fellow All-Conference brother Tre Daniels, and lead the state in tackles, and I have offers to play at the next level. So all that hard work and sacrifice paid off in the end because I accomplished all the goals I set out for myself.” said Latu

“Our defense played great all year,” he said. “Those guys played fast, put pressure on our opponents offenses weekly and it was great to watch.”

However, on the other side of the ball was a different story.

Through its 10 games all season, the Mustangs never managed to put up more than two touchdowns. Its offensive woes hurt LMC throughout the season.

Kicker Javier Hernandez ended up with the most points on the team with 38 and averaged 4.2 points per game. Behind him, Tyrik Daniels and Josh Wishom tied for second with 12 points each.

“Our offense struggled as a whole and I have to take full responsibility for that. In all our games the defense and special teams kept us in close games,” said head coach Chris Shipe

While the results may seem negative, it has been an improvement from last season. Los Medanos finished with an improved record and has shown a defensive strength for next season.

“The one thing I can say is this team through 11 weeks battled. They stepped up to the challenge every week and showed true fight week in and week out,” said Shipe.