Stangs hold the Storm to 0 points 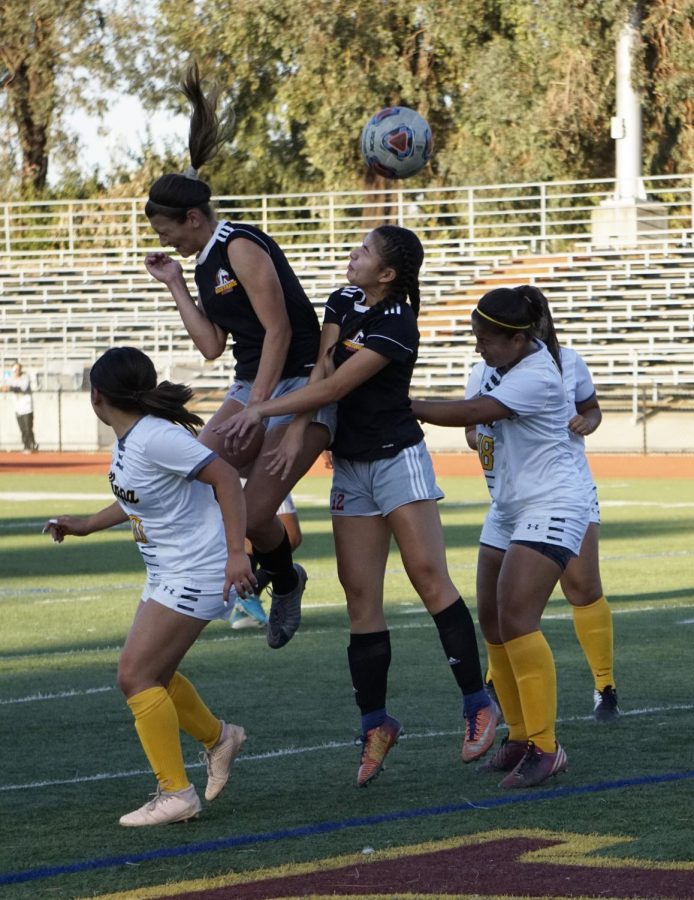 The Los Medanos College Soccer Team hosted the Napa Valley College’s final home game of the season. The Mustangs were victorious, outscoring the Storm 7-0. Anissa Gomez led the scoresheet with a hat trick.

In a pre-match ceremony, five LMC sophomores were celebrated for their contribution to the team. Marymer Mejia, Holly Gallagher, Eryn Wheatley, and Belen Velasquez played in their final regular-season game for the Mustangs, while Kailey Lewis was forced to sit out due to an injury.

The match was delayed due to match officials arriving late. Instead of 45 minute halves, each half was cut 10 minutes, only playing 35 minutes halves.

Anissa Gomez scored the first goal in the fourth minute after a cross from Alicia Cardenas. Two minutes later, Belen Velasquez looked to extend the score line, but her header was denied by the post. In the 18th minute, Gomez netted a brace for a 2-0 scoreline, Nayeli Carbajal was credited with the assist.

After 20 minutes, the Mustangs led 3-0 after a pass from Gomez led to a goal by Jazmin Alanis. Alanis shot the ball into the right side upper 90, catching the goalkeeper off guard. On minute later, Litzy Ramirez scored the fourth goal, but was flagged offside, and the goal would not stand.

In the 30th minute, a handball from Napa Valley led to a free kick for LMC. Holly Gallagher took a direct shot around the 25 yard line. Gallagher’s shot would go through the Storm defense, hit the far post, and into the goal for a 4-0 lead.

The Storm offense finally had a chance to score from a free kick, but Gallagher cleared the ball away. In a counter attack, Litzy Ramirez scored the fifth goal of the match, Gallagher provided the assist to Ramirez’s fifteenth goal of the season.

Gomez achieved a hat trick in the second minute of the second half. A cross from Eryn Wheatley found Gomez’s forehead and went passed the Storm’s goalkeeper. Because of  her hat trick, she scored her twenty first goal of the season. She finished BVC regular-season play with 23 goals, leading the conference.

“[Scoring] helps me get motivated for playoffs, it’s like, ‘I can do it now, I can do it later,’ it just makes me work harder,” said Gomez.

Isabel Dumpait scored the final goal of the game in the sixty-fifth minute. Dumapit dribbled her way through the Napa Valley Defense, and placed the ball to the goalkeeper’s right side.

“It’s been a good season, I think we’ve gotten stronger as we’ve gone through [the season]. [It’s about] staying focused, once playoffs come the teams we play are going to be a lot more high level,” said head coach Zach Sullivan.