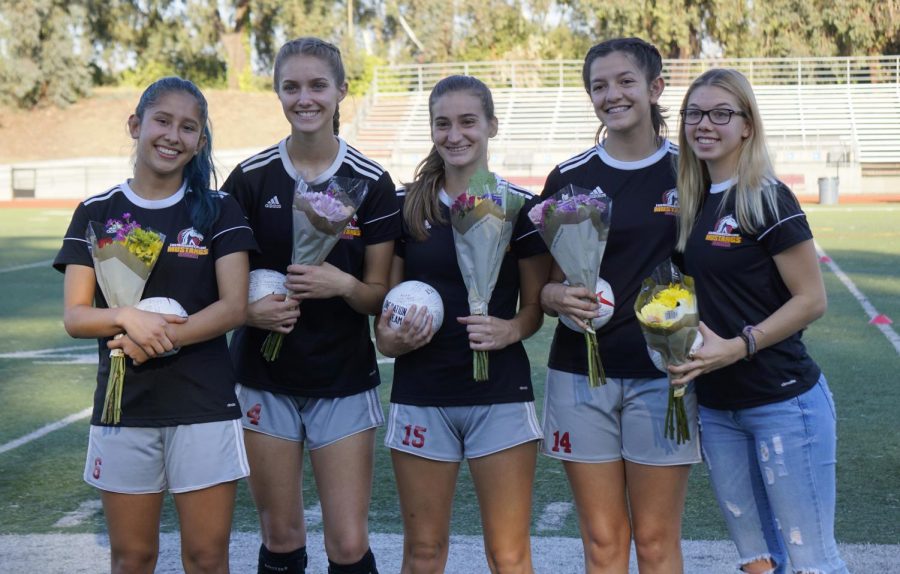 After the team’s 8-0 victory against Mendocino College, the Mustangs clinched its second consecutive Bay Valley Conference title. It’s been a quick turn for the LMC soccer program, as prior to last year’s first title victory, the team had not won a conference title in about 24 years of recorded history.

The LMC Women’s soccer team improved their tactics considerably throughout this last season. The Mustangs has a slight improvement in non-conference play, racking up four victories while playing a very tough conference play. After it’s last non-conference game against Skyline, losing was a foreign language for LMC, going on a 15-game unbeaten streak, outscoring opponents 80-2 during that span.

It’s safe to say LMC knew how to score, with three players leading the league in goals. Anissa Gomez placed at No. 1 with 23 goals, leading by a landslide as teammate Litzy Ramirez Cuevas followed second with 16 and Nayeli Carbajal at third with 15.

“After scoring my first collegiate goal it was a great feeling because scoring has never been easy for me, so I took it into my hands to create a goal for me and that was to try and score every game I played in,” said Gomez. “It really gave me the motivation to keep trying and work to continue to score and keep that stat up.”

The coaching staff notes that this team’s culture in the program has changed, with this year’s team having much better chemistry, producing a better style of soccer.

In Sullivan’s tenure, his first season saw the program barely able to field a team with only players who were picking the sport for the first time. Now, it’s a hot spot for local talent to continue to pursue their soccer endeavors.

But what’s been the key to LMC’s sudden turnaround?

For the first time in what seems like ages, LMC has been able to convince local talent to stay in the area, or to come out to play.

“I do see the culture changing as LMC as a viable option to play high level JC soccer and to transfer to play at a 4 year,” said Sullivan. “I think the culture in the community is changing as well. More players are committed and understanding of what it means to play for a college team. Showing up and working hard are essential and making sacrifices to be at practice are necessary.”

Of the top three goal scorers in the league, they all attended Bay Valley Athletic League schools. Similarly, those players — and other contributors for the team — were freshmen who adapted nicely to the Junior College level of play.

“The struggles to get this program to where it is today are what makes us work hard to keep the level high,” said Sullivan. “As a coaching staff, we have seen the program grow a lot, but we never forget where we started. It motivates us to continue to improve the program”

LMC now prepares to travel to face off versus No. 6 Folsom Lake on Saturday, Nov. 24 in the NorCal playoffs.