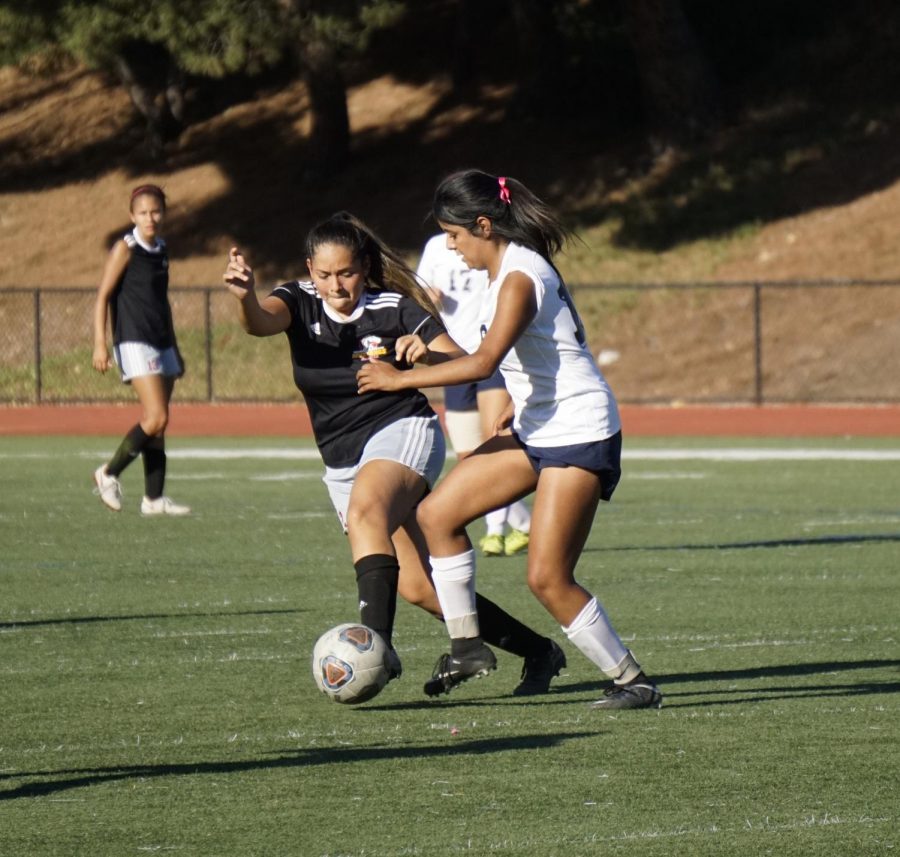 Jazmin Alaniz, No. 2, battles a Yuba College player for the ball during the second half of the game.

Player Marianna Giovanetti opened the score sheet with her first goal of the game in the very first minute of the game. Nayeli Carbajal set up the goal scorer. Four minutes later, Nayeli Carbajal found the back of the net, increasing the score to 2-0. Sarah Figueroa and Holly Gallagher were credited with the assist of the second goal.

Carbajal scored her fourth and final goal of the game two minutes into the second half. Gomez got her second assist of the day when she helped Carbajal score her fourth goal.

One minute later, in the 48th minute of the game, Gomez found herself on the scoring end of the ball, extending the Mustang’s lead to 6-0. She would earn a brace in the 59th minute, and Alicia Cardenas earned an assist with Gomez’s goal as well.

“I think we’re really good at connecting with each other, to set each other up to be able to score those goals,” said Carbajal. She sits in second place, behind her teammate Gomez, for goals scored in BVC.

Cardenas would, again, assist Gomez in the 59th minute to put the Mustangs up 7-0. Gomez’s brace would add to her 12 goals on the season, tallying up to 14 and she’d remain as the top goal scorer in BVC.

Giovanetti got back on the score sheet in the 66th minute with an assist by Eryn Wheatley. She’d complete her hat trick 11 minutes later with an assist from Kailey Lewis.

“It was really fun, being able to score three goals, honestly. My second [goal], with a cross from Eryn [Wheatley], I did a volley, which was pretty cool to do,” said Giovanetti.

As the season continues, head coach Zach Sullivan praises the offense, but “giving up zero goals helps a lot,” he said. “Getting the result, getting the early goals is what has helped us take off pressure.”

The Mustangs return home Tuesday, Oct. 29, where they’ll face Contra Costa College for the second time this season. Kickoff is scheduled for 3 p.m.

For more information on the team, visit: https://www.losmedanos.edu/soccer/.