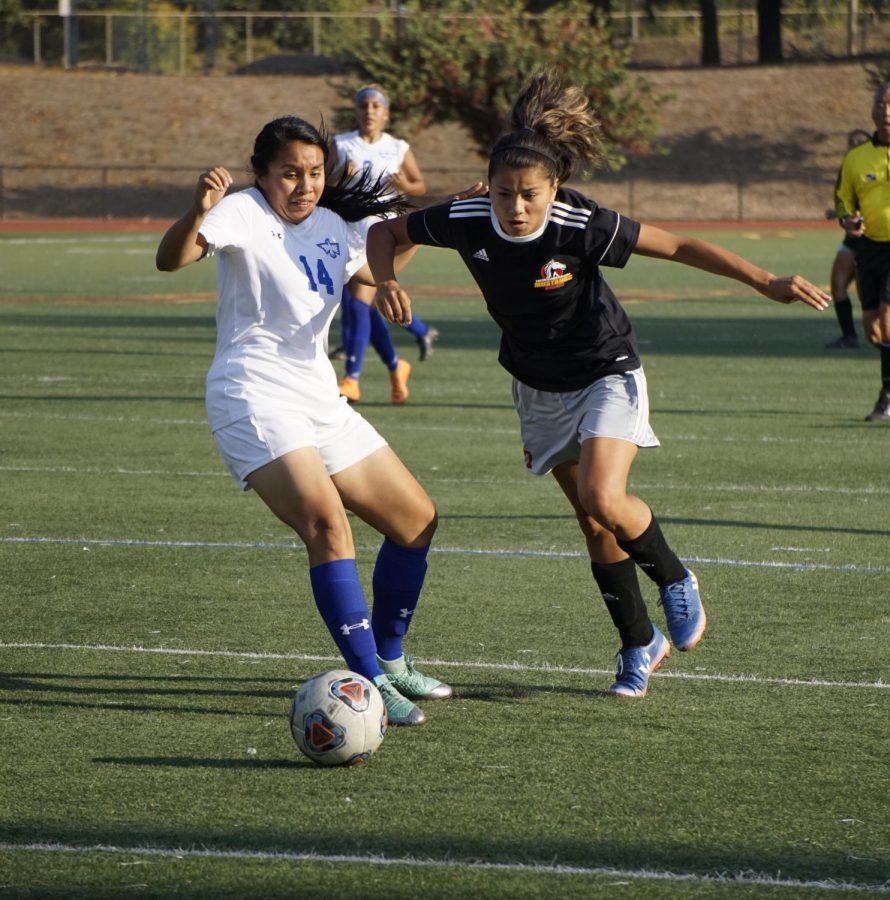 Mariah Minhares, No. 7, battles for the ball against a Merritt College player.

After riding on a four-game winning streak, the Merritt College womens’ soccer team came into town with its confidence running through the roof.

On Friday afternoon when they took on Los Medanos College, it was a battle to see who took sole possession of first place. But within minutes, Merritt discovered what it was like to play tough opposition.

At the four minute mark, Marianna Giovanetti scored LMC’s first goal of the game, it was assisted by Isabel Dumapit and Nayeli Carbajal. It set the tone for the game, the Mustangs didn’t stop. What, on paper, seemed was going to be a neck and neck matchup ended in an 8-1 blowout win for LMC.

LMC stands in first place in the Bay Valley Conference, with 18 points, and are undefeated in conference play, outscoring BVC opponents 36-2 during that span.

“Our team chemistry last couple of weeks has been coming together,” said head coach Zach Sullivan, “Some of the sequences are just stuff we couldn’t do last year. The movement of the ball and switching the field.”

The Mustangs took the field with confidence with the same strategy that’s led them to where they stand.

After Giovanetti’s goal, the goals kept coming naturally. Forward Nayeli Carbajal scored in the 14th minute to make it 2-0, Anissa Gomez would provide an assist. The former University of San Francisco commit Giovanetti scored her second goal of the game in the 30th to give LMC a 3-0 lead, Eryn Wheatley would be credited with an assist off of the goal.

Giovanetti set the brace setter among the team. Carbajal scored her second while Litzy Ramirez found the net twice right before the half ended to make it 6-0. Ramirez scored her brace in the span of six minutes, scoring in the 34th minute, and again in the 40th.

Kailey Lewis scored a 40 yard blast to make it 7-0 in the second half, Jazmin Alanis would play provider for Lewis’ first goal of the season.

Forward Anissa Gomez tallied her 12th goal of the season, adding room for her to remain as the top goal scorer in the BVC. “She also leads with her work rate. She wants the ball every play but that’s what you want from you top goal scorer.” said Sullivan.

LMC’s shoutout ended in the 84th minute, when Merritt College found the back of the net for their only goal of the match.

The Mustangs return home on Friday, Oct. 18 when they face the Mendocino College Eagles. Kickoff is scheduled for 4 p.m. For more information on the soccer team, visit: https://www.losmedanos.edu/soccer/index.aspx.