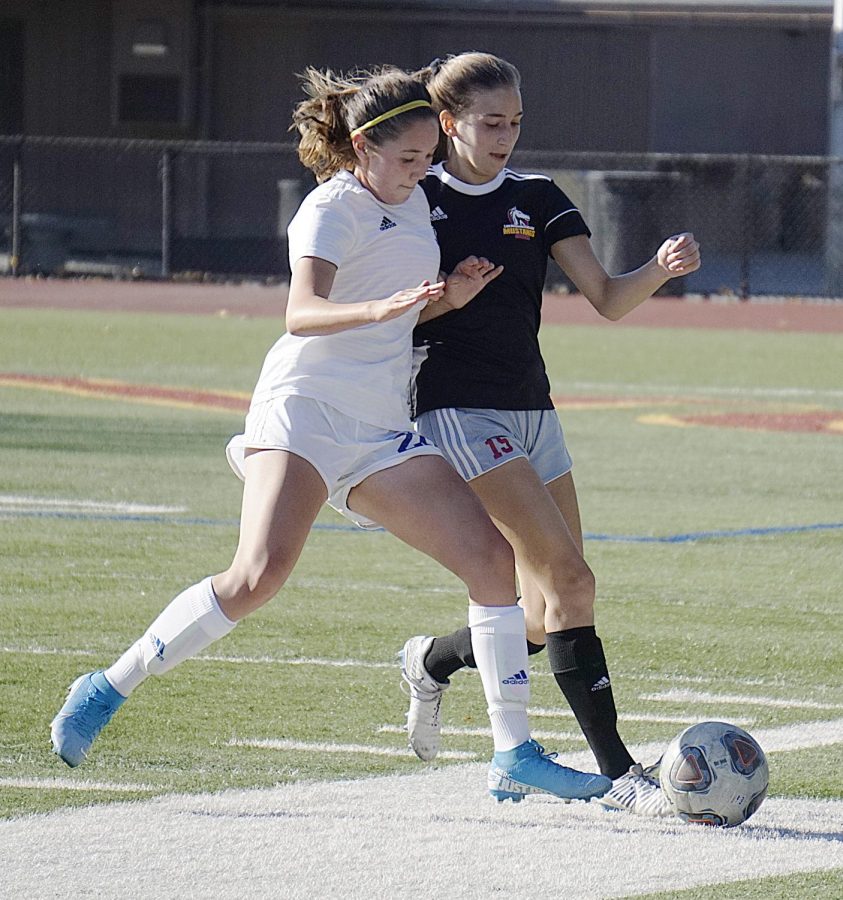 Eryn Wheatley, No. 15, battles for the ball during a defensive play in a soccer game against Solano College.

LMC began the game applying immense amounts of offensive pressure to the Solano College Falcons with a shot in the third minute of play by No. 17, Marianna Giovanetti, and again in the fifth minute with a shot by No. 10, Lizty Ramirez.

Both plays were started off by freshman player, Nayeli Carbajal. The gears shifted in the 14th minute when the Falcons had a goal-scoring opportunity which was saved by goalkeeper Alissa Caburnay.

Carbajal scored the first goal of the game in the 15th minute with an assist from Anissa Gomez. Gomez played the ball through to Carabajal after Ramirez gained possession of the ball in midfield, leading the team to a goal. “”It felt good because it opened up the game for us and made us more confident in ourselves,” said Carbajal.

Two minutes later, Gomez extended the score to 2-0 after a Falcons’ defensive error. She was able to dribble through the defense and get the ball passed the goalkeeper’s right side. “We needed the lead, especially against our toughest competitor in conference, so I when I saw that I made it I thought ‘okay, now we have our momentum,’” said Gomez.

The Falcons did not slow down their play despite being down by two goals. In the 20th minute, they forced Caburnay to make a diving save after a cross went over the Mustangs’ defense. Both teams continued alternating to create goal-scoring opportunities, forcing the goalkeepers on both teams to make saves.

In the 41st minute, Solano College was awarded a free-kick 20 yards away from the Mustangs’ goal. Cabrurnay was forced to make yet another save to keep the Falcon’s score at zero.

The second half resumed with the Mustangs leading 2-0. It wasn’t until the 63rd minute when the scoreline changed. Litzy Ramirez scored the Mustangs’ third goal. “When I scored the third goal, it felt like the victory was ours because it gave us more confidence to win and score more goals,” she said. Late in the match, the Falcons were able to get on the scoreboard via a corner kick. The score was now 3-1.

The Mustangs finished the match with Gomez kicking the ball to the post, missing the opportunity to extend to scoreline to 4-1.

The Mustangs’ next home match is Oct. 11 with kickoff set for 4 p.m. For more information on the LMC soccer team, visit www.losmedanos.edu/soccer.