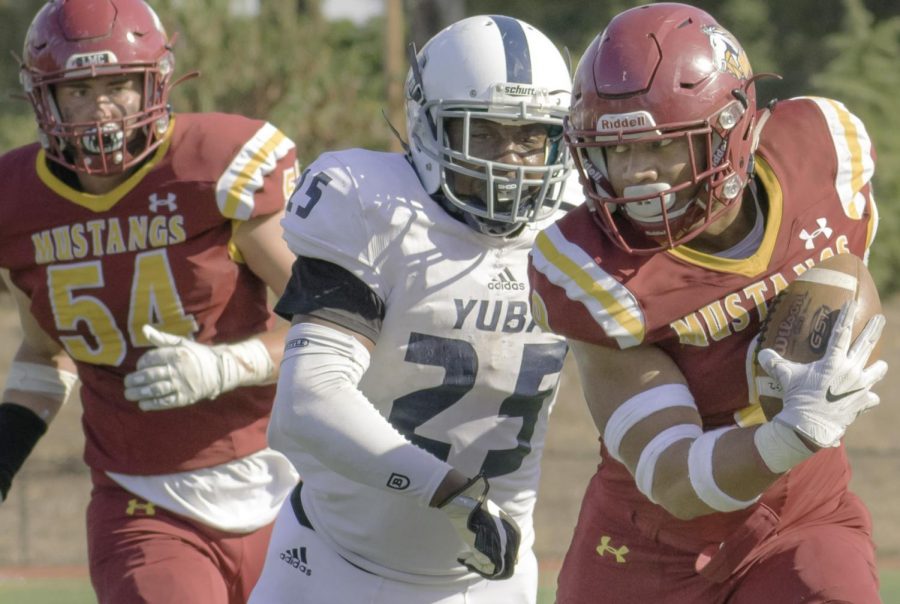 Los Medanos College quarterback Zach Burke had to dig deep within himself to reach the endzone during overtime, starting off Pac-7 conference play with a victory against Yuba College.

After four quarters of football, both teams were tied at 7-7, which lead into overtime.

Yuba College had scored a field goal as a result of its overtime drive, which meant LMC had to match or overshoot Yuba’s score in order to keep the game alive and win. On third down, Burke showed up big, rushing past a seemingly impenetrable Yuba College defense to win in overtime.

“It was a blessing to help my team win in an important conference game against a strong team; I take responsibility for that game going into overtime so the emotions when we finally scored [in overtime] were definitely high” said Burke. “After that game, it’s clear that this team will never stop playing their hardest til the end and we play as a team every single down.”

The Mustangs started the scoring early in its first drive of the game, something that they are familiar with doing. Justin Boyd, wide receiver, passed to ball to Josh Wishom for a 35-yard touchdown.

After that, LMC struggled offensively to put more points on the scoreboard and turn over downs on multiple occasions.

This could be attributed to the loss of the Mustangs kicker Javier Hernandez, who was not present during the game. Multiple times inside of Yuba’s 20-yard zone the Mustangs could not go for the field goal attempt, which could have potentially handed them the win in regular time. Last time LMC played at home, Hernandez’s two field goals proved to be the difference in the game, handing LMC the victory over San Jose City College.

Early in the fourth quarter it seemed like LMC was going to get a 7-0 shutout against Yuba College to win the game, but the 49ers made sure it would go right down to the wire. Yuba’s Kievoughn Baylo intercepted Burke’s pass on the Mustangs’ own 9-yard line to return it back to the endzone for a touchdown. Neither team was able to find a break through which lead to overtime to determine the result.

“I thought our guys did a great job of competing for all 60 minutes during regulation and overtime period as well,” said head coach Chris Shipe. “Our defense has been playing great all year. They only gave three points all game and those points came in overtime.”

The Mustangs defense did not give up any points in regulation time with Heamasi Latu, again, leading the way. Latu has 15 tackles in the game and still leads the state in tackling while also getting to interceptions.

“My coaches put me in the right positions for me to make the plays needed and it feels great to execute it,” Latu said. “We just gotta keep the momentum going and go up from here.”

After the game was over, an altercation occurred between both teams. No one from either team got any serious injuries. Shipe said “Regarding the incident after the game, it is unfortunate because it overshadowed a very hard fought game by two very good teams.”

Los Medanos have a bye week next week, its next conference game will be Oct.12 against defending Pac 7 champions, De Anza College, which “comes at a great time because we have a number of guys who are banged up with injuries,” said Shipe.