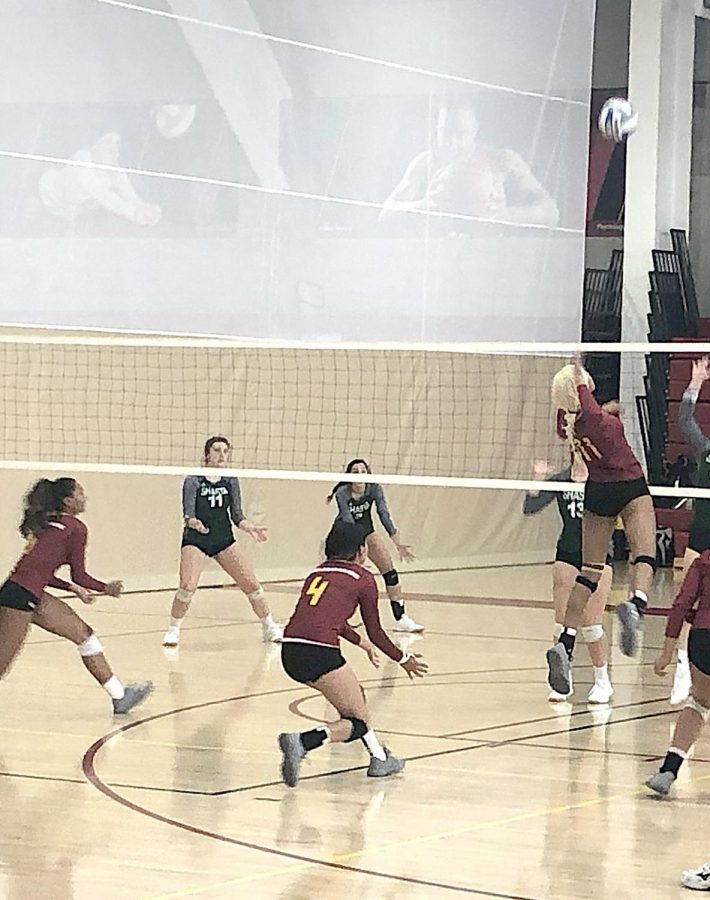 LMC Mustangs spiking the ball back to Shasta College.

Shelby Bryant, No. 5, and Emily Sobolik, No. 9, were among some of the most notable players throughout the games. Their ability to work together allowed them to play very well in the match and also allowed the rest of the team to lean on them due to their stellar play.

Despite the loss against Shasta, Coach Lou Panzella was still pleased with the team’s level of play and the way they competed.

“All the matches were close, we played the best we could,” said Panzella.

All four games were close and every play had the crowd on the edge of their seats as they went back and forth fighting for each point.

“We are still a work in progress,” said Panzella,“ [We’re] gonna keep working and trying to get better.”

The team went on to play their second game against Feather River College. There were a lot of tough plays throughout the game as LMC struggled to come up with a win during the three-game match.

The LMC volleyball teams next game will be played at an away game against Napa Valley College, as they look to end their four-game losing streak. This is also their first time meeting this season. The next time these two teams will be facing off is on Oct. 25th.

The Mustangs are currently 7-10 and are still looking to improve to get to that 500 mark. They have not won a game on the road yet.