The heist of the season 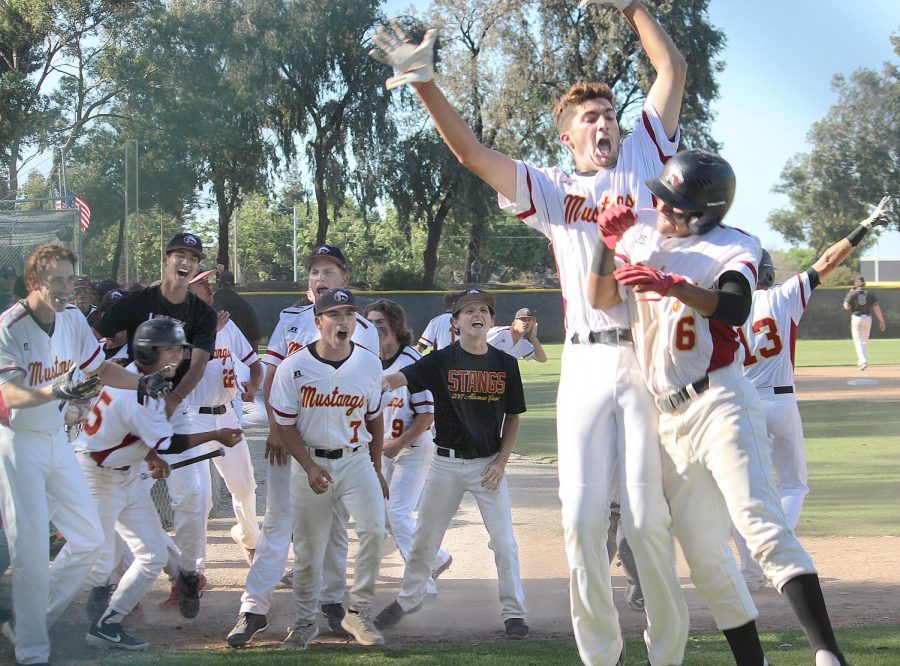 The LMC baseball team celebrates after it beat Mission college 11-7 May 4 to advance in the California Community College Athletics Association playoffs.

The ultimate comeback victory was achieved at the end of Los Medanos College baseball’s first round of playoffs.

LMC played its round of CCCAA playoff baseball against Mission College in a three-game series. The series began Friday, May 3 and came to an end with a doubleheader scheduled on Saturday, May 4th, with the best of three moving on to the next round.

LMC took game one 4-3 and Mission College took game two with the final score of that game being 5-4, pushing the series to a third game.

Joshua Cerejo was the starting pitcher for the Mustangs and pitched 5.2 innings with two strikeouts. He allowed four runs across home plate, including a home run to center field.

The Mustangs bats were not able to find the holes in Mission College’s defense until the seventh inning when LMC’s Neko Capsaliaras broke the no-hitter with a single to center field.

The last scores of game two came in the ninth inning for the Mustangs. The hopes of a walk-off victory were cut short after Justin Roper struck out for the final out of the inning leaving Milan Mijanovic stranded on first base.

“The last one didn’t go our way and you can be angry about it, you can be sad about it, you can let affect the way you play but the games are separate,” said head coach Anthony D’Albora following the game two loss to Mission College. “The better we can do of attacking, making all of our defensive plays in the routine, executing our pitching and making our quality at-bats, the better chances we have to win that next game.”

During the beginning of Meylan’s outing, Mission College’s momentum reached its peak leaving D’Albora to gather the team together for a team meeting in the fourth.

“We gotta forget the other stuff. Our big thing is that the next pitch is what matters the most,” said D’Albora recalling what he said in the huddle. “Baseball is too hard of a game, you are gonna fail too much offensively, you are gonna make physical mistakes. The message was simple just play for each other and find a way to finish for each other.”

As soon as the Mustangs got the chance to go on offense, they brought the momentum back to their side of the field. Mijanovic and Taylor Maldonado scored two members of the Mustangs baseball team with singles in the bottom of the third. The following inning, Jared Hedrick then grounded into a fielder’s choice to score Trevor Fletcher from third base.

The Mustangs remained scoreless until the eighth inning where the heist of the season began.

Fletcher was the man to start the comeback when he singled with the bases loaded to drive in Vince Lontz. After his clutch single, Fletcher then was subbed out for a pinch runner. Jake Guzman was then walked to score in Maldonado from third base. Bases still being loaded, a new pitcher is subbed in for Mission College and then Jesus Hernandez singles to give the Mustangs the lead scoring two runs.

“We were just doing quality at bats,” said we got the bases loaded and just took it pitch by pitch.”

Hedrick then extended the lead further with a bases-clearing double to center field. Then to cap off the rally, Lotz reached base on an error which also scored Hedrick.

“They gave me to sign to sacrifice bunt but they also gave me the option to slash if I saw too many people crashing,” said Hedrick. “I saw the second basemen was charging in and the shortstop was leaving his position so I took a hack.”

The explosive comeback gave the Mustangs the lead, the win and the series win to advance to round two of playoffs with the final score being 11-7.