Stangs secure a spot in BVC

Title within their reach 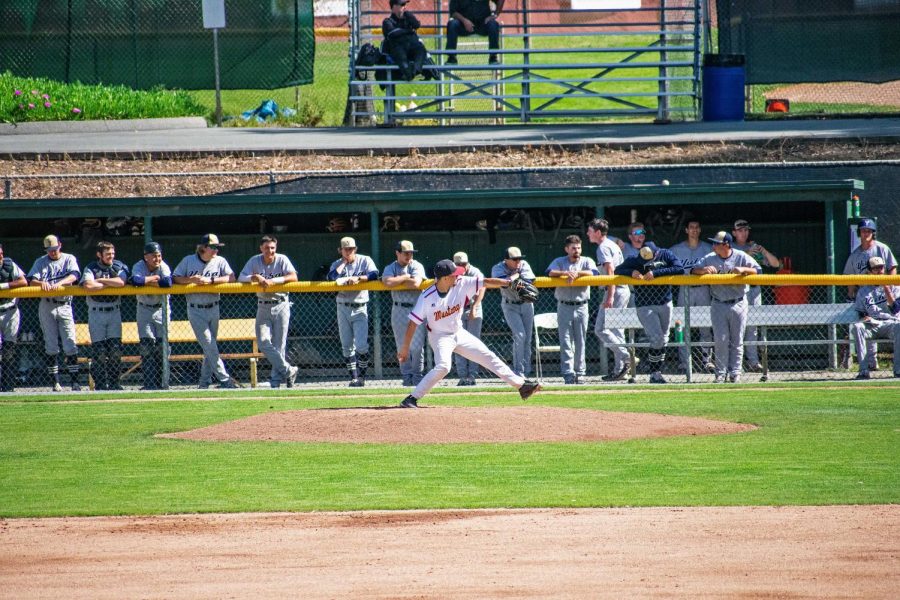 Dominic Arias throws a pitch as the Yuba dugout watches on.

All Justin Roper could do was watch his team lose the lead but in the bottom of the eighth inning, before he heard his name called to the on deck circle.

And he made his only at-bat of the game count.

Roper came on to pinch-hit for Zach Ellsworth in the eighth and his single was enough to drive in Jared Hedrick from third.

“Going into a close game late is pretty nerve wrecking for a lot of people, but when the coach tells me to get ready to go in, my mindset is to find a way to get the job done,” said Roper “I told myself to stay calm and relaxed and had all of the confidence in the world in myself to get the job done.”

Head coach Anthony D’Albora praised Ropers’ attitude for coming into a game cold and producing, something he did against Solano College where he hit a triple to drive in a run in the eighth after watching the game from the dugout.

“I give that guy so much credit [Roper] because he’s had a couple of those opportunities where he’s not in the starting line up, but he stays ready all day,” said D’Albora.

The Mustangs didn’t stop the runs there, Neko Caspsaliaris’ single was enough to bring Roper home. Following an error from the right fielder, Vince Lontz was awarded home. Lontz’s run was enough to lift them above Yuba by one with the inning ending 5-4.

Poir to the seventh, Domonic Arias only allowed one hit the whole game, no runs, and retired eight batters on the mound. Scott Meyland came in for Arias in the seventh, which included two pitching changes, Arias gave up two hits and the 49ers put up two runs which were based on errors.

“Through the first six innings I felt great. My body felt great, coming into this game my arm felt alive,” said Arias “Watching the seventh inning, we have a lot to work on as pitchers. Working on coming out of the bullpen and going right at hitters, not going at people, going right in the zone.”

Yuba took the seventh by the horns. Keith Walker doubled to drive in Dareon Thompson and Tre Pankratz to add on to the two runs that were already put up.

“We just have to be ready to take more quality at bats early in the game,” said D’Albora “We scored a run and took the lead but we’re the type of team that usually one [run] becomes two, three, four.”

Following this victory for the Mustangs, the team secured a seed in the Bay Valley Conference playoffs. The second game of the series against Yuba will take place April 18 away for the Mustangs. With a win they secure the BVC title and a chance at hosting a regional playoff game.