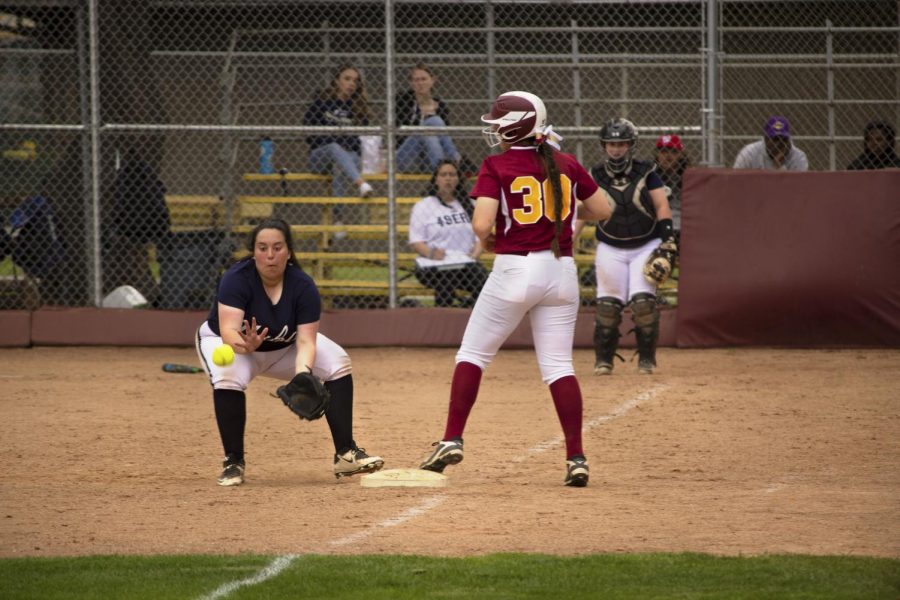 LMC’s Alexus Coleman advances from second to third base during her team’s 9-0 win over Yuba College March 19.

Weather and a damaged field has kept the Mustangs from playing almost the entirety of their pre-season. However, on March 19, the Mustangs let loose during its first Bay Valley Conference games against Yuba College.

Morgan Billeci, starting pitcher of game one, went the distance throwing for all five innings and was lights out. Billeci threw a two hitter shutout with the addition of one walk and three strikeouts.

“It feels good to be back on the field,” said Billeci who wasn’t able to suit up for the last pre-season game the Mustangs played. “It’s been a bummer getting all of our games canceled and then rescheduled.”

Billeci also out performed her opponents with her batting, gaining a total of two RBIs off of one hit. Tumariana Hill and Alexis Coleman joined Billeci with batting in two RBIs of their own. One of Coleman’s RBI’s came from her very own solo home-run.

In the second game against Yuba, LMC managed a total of 21 hits. Billeci once again took the mound for two full innings in game two and relief pitcher Katelyn Borger finished off the rest of the game. Borger allowed three hits, one walk and struck out four batters.

“[Today] was probably some of the best games we’ve been able to play this year,” said coach Rognlien. “It was a great tune up for the rest of the season.”

Rognlien also referred back to the Mustangs previous game, which was the final pre-season game before BVC play, to draw comparisons on the team’s performance.

“We had a total of 14 errors within the span of two games, today we had no errors,” said coach Rognlien.

The Mustangs impressive start is nothing but the team meeting expectations. The high hitting offense and the well performed defense gives the Mustangs hope going into the regular season. The Mustangs softball team will play against Mendocino College for their next home game on March 28.