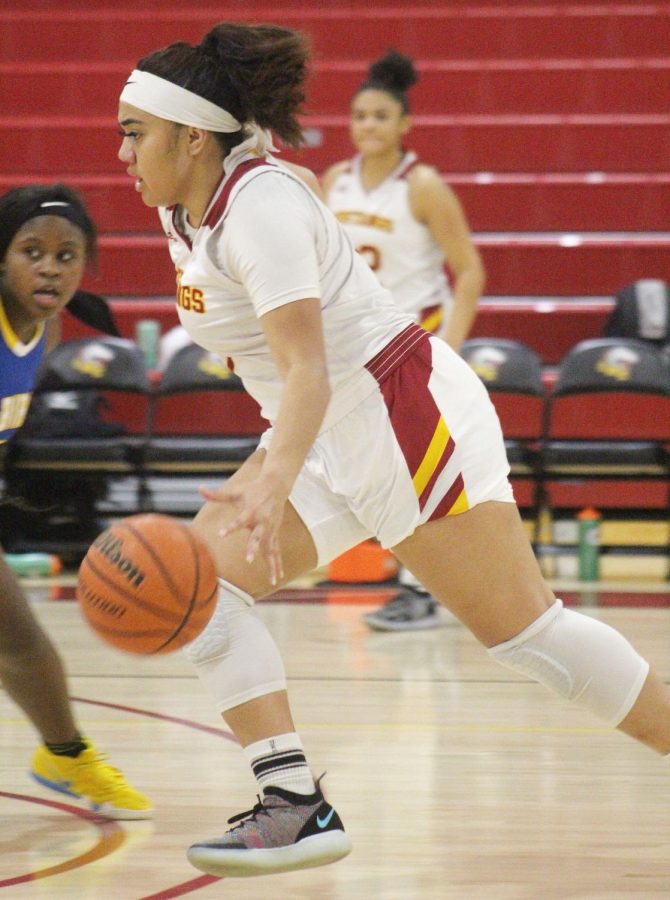 Seuvahnia Kuka dribbles the ball up the court in a home game against Merritt on Feb. 6.

If you’ve been following her high-caliber career, it should be no surprise Seuvhania Kuka is the best in her league.

In Kuka’s all-star performance in her first season with the Los Medanos College women’s basketball team, she was the only player in the Bay Valley Conference to record a double-double, while averaging 20.5 points per game and 10.5 rebounds per game. Her strong sophomore season was enough to gain her the honor of being named the 2019 Bay Valley Conference MVP.

“She did everything for our team this season. She played point guard, was an effective three point shooter, post player, defender and rebounder on defense. She also was a great teammate,” said LMC athletic director and womens’ basketball head coach Richard Villegas. “She earned the MVP of the Bay Valley Conference with a hard work ethic and great attitude, not only on the court but also in the classroom with a 3.2 GPA.”

“It honestly feels good to be the MVP of the BVC because I’ve been grinding every day just to be a better player. And I feel like I honestly showcased that this season,” Kuka said.

Kuka spent the first year of her junior college career at Diablo Valley College, but decided to transfer to LMC due to it being a closer commute from her home and having a strong chemistry with the coaching staff.

“My coaches helped me a lot. They gave me a chance to play on their team. If it was not for them believing in me every game, I don’t think I would have pushed myself to be better. They helped me work to get MVP,” Kuka said.

But for the Diablo Valley College transfer, it’s her second time doing so. During her tenure at Pittsburg High School, she was named the 2016 Bay Valley Athletic League MVP, leading the Pirates to second place in the BVAL.

Villegas praised her for being an excellent teammate, which added so much more value to having her part of the Mustang squad. And her teammates feel the same way.

“She has the mind of a coach, meaning that all those little tweaks that coaches make in order to excel your game, she also saw them,” said teammate Marayah Guinto. “She always tried to motivate us as a team in order to reach the success we desired.”

Kuka developed a love for basketball by watching her aunt lace up her sneakers and hit the hardwood at Pittsburg High School, where Kuka’s success was yet to be written. She has never wanted to stop playing basketball since. And her basketball career has the window to keep on going. According to Villegas, she is being recruited by four-year colleges — which represents the opportunity to play at next level, and even win MVP.

“I feel like I can do it. Still have to perfect myself, but I’m ready to play at the next level. I’m ready as the next person,” Kuka said.