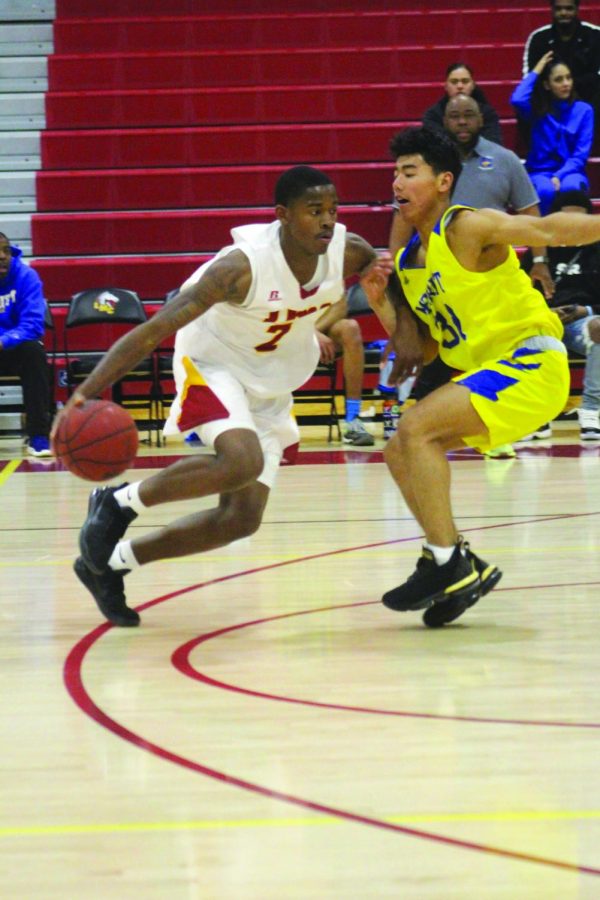 The stat line does not do the Los Medanos College Mustang’s victory against the Merritt College T-Birds any justice.

From the start, the Mustangs were playing hard, scoring points but Merritt College began kicking back basket after basket, not giving in to the Mustangs offensive tactics.

Throughout the game the teams were evenly matched. The game consisted of countless turnovers by both teams giving the game a rough flow. However, by the end of the second half, clutch plays gave the Mustangs the lead they needed with the final score of 78-68.

Some highlight names from the game were Kalil Freeman and Raazhel Watkins. Head basketball coach Domenichelli states that Freeman has a great feel for the game. Freeman made a couple clutch 3-pointers early in the second half

“He’s not just a very good shooter but he has a great feel on how to pass, catch, move with the ball, find the open man.” said Domenichelli “ I think his passing and team leadership really got us over.”

Raazhel Watkins became like a bullet on the home court, fueling from the energy of the home crowd and using the comfort of practicing in the atmosphere to let his confidence push his team through the game. Watkins is one of the top players in the Bay Valley Conference.

“Raazhel Watkins showed it again with his 28 points,” said Domenichelli “ Getting to the basket, finding guys, and making big free throw down the stretch.”

Watkins showcased a number of important leadership skills, constituents of pushing the ball up court, making sure the ball gets passed around and calling out the shots as his position as a point guard should do. He outmaneuvered defendants with ease and was a huge part of the Mustangs points throughout the game.

The Los Medanos Mustangs Basketball team will be wrapping up their 2018-2019 season with their next few games being home against teams such as College of Alameda, Medencino College, Napa Valley College and Contra Costa College.