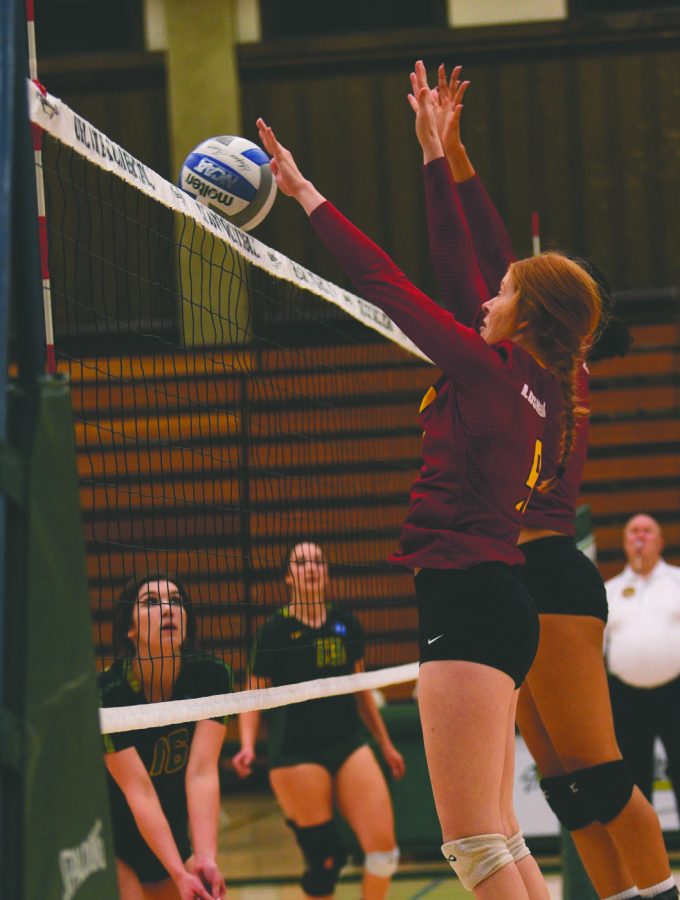 Emily Sobolik blocks the ball from entering her side of the court.

Another year of volleyball has come and gone, leaving a banner at the gym during its time here.

LMC was placed against Ohlone College in a must win game that they lost 3-0.

The first set ended with only a two point difference, the Mustangs trailed 25-23. The following two sets LMC was unable to improve on those 23 points, ending the second set 25-22. In the last set, LMC scored the least points on the night ending their hope of continuing in the playoff with a 25-19 score in the final set.

“I am very proud of the way we competed in the playoffs. It would have been great to pull out a win, but we didn’t,” said head coach Lou Panzella. “If we keep working, keep improving, we will break through and earn a playoff win soon.”

Since the beginning of the season, Sophia Clavido made it clear that one of their goals of the season was to win the Bay Valley Conference title.

LMC ended BVC play with a 13-1 record and as co-conference winners with Solano College. Their only loss of conference play coincidentally was also at the hands of Solano on the final game of the regular season.

Since Panzella took over seven years ago, the volleyball program has improved every season but Panzella believes the players deserve most of the credit for the teams’ success.

“Our success is because we are getting good athletes that are good volleyball players and great people,” said the head coach.

One of the biggest turning points for the team was when Taylor Scriven played for LMC, according to Panzella. In her sophomore year she made conference MVP and played Division 1 volleyball.

None of the players in the current squad were apart of the 2016 team that brought home the banner, this is their first title together as a team.

“The result of all that [hard work] was a team that kept improving all season long, supported each other, took care of each other, and won and lost together, as a team, earning and deserving all the accolades they are getting,” said Panzella. “So yeah this season was really special.”

“We have the nucleus of an outstanding team for the 2019 season,” said Panzella.