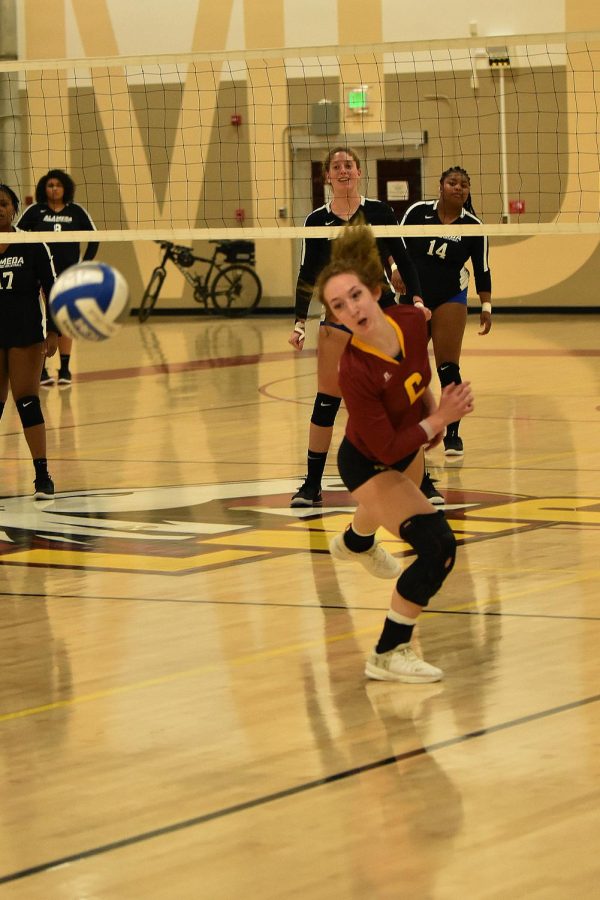 The team captain described this as one of the teams’ goals this season back in September, now it has become reality.

Although LMC (13-0) have already cemented first place in conference, Solano (12-1) still have the opportunity to get a share of the spoils if they can manage to defeat the Mustangs on the final game of the regular season on Nov. 9.

Los Medanos asserted their dominance from the get-go.

The undefeated team claimed the first point of the set, from there they never lost the lead throughout the set, ultimately winning 25-19.

“I think we knew this game was important. We knew what we needed to do.” said libero Emily Jones. “We got straight to the point.”

The following set the Cougars got the first point. That would be the only time that they have the lead throughout the whole set. Solano managed to tie the game at 3-3 but that would be the closest they would be to the lead as for the rest of the set LMC would only drift farther away with the score line, finishing the set 25-12. LMC went on a seven point scoring streak, sending balls hard and fast but the streak was ended on an error.

“This is what I was talking about from the very beginning [winning the title]. It doesn’t feel real that this was my last time playing in this gym.” said Clavido “I told everybody in the beginning all we need is all we got, cause the only team that can be us is ourselves.”

The setter is currently leads the conference in assists, with a total of 378. 30 of those coming against the Cougars.

The Mustangs finished off the game 3-0, getting another clean sweep. The set finished 25-14, leaving an 11 point gap. Alameda did not look too threaten the Mustangs’ lead throughout not just the set but the game as well.

“Every year the goal is reaching the playoffs, winning conference. This is now the third year in a row that we are going to be in the playoffs and fourth in the last fifth. That’s what we are looking to do consistently.” said Panzella “They play with a lot of heart. As a group they like each other. That makes a big difference as a coach.”