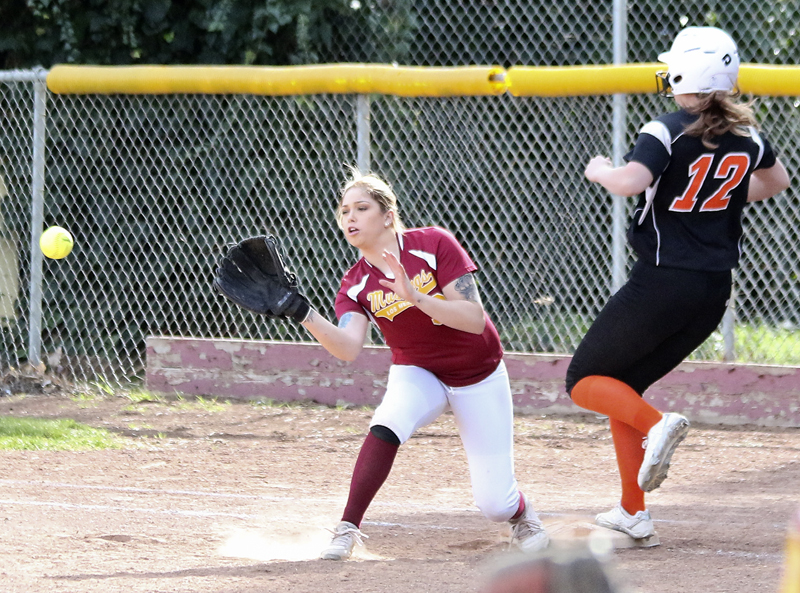 First baseman Shaylyne Siino stretches out to attempt to record an out against Lassen College.

Los Medanos College’s softball team battled Sat., Feb. 24 against Lassen College but came up short both games of a double-header, 8-3 and 8-5.

In the first game, Mustangs player Shaylyne Siino started off on the mound and teammates Sage Ford, Ashley Derby, and Sierra LaMunyon remained vigilant and acted upon every hit from the first three Lassen batters. To take advantage of the opportunity to quickly rack up outs for the opposing team, Mary Borlongan and Siino showed in the bottom of the first that they could respond to a pitcher they have not yet faced. However, the hits were pop-ups caught by Lassen outfielders and sent the game to the top of the second inning with either team yet to score.

In the top of the third inning Mustangs player Brittney Bangert and Sara Rodgers showed great team chemistry limiting Lassen to only one run home with the bases loaded.

When the Mustangs got back into the batter’s box in the bottom of the third inning Borlongan hit a double. The team effort remained unwavering and was rewarded when they tied up the score in the bottom of the fourth inning on a hit by Rodgers that sent Shayna Lee home.

With momentum on their side, Lee made a stunning catch in the outfield alongside teammate Ford. Siino earned Lassen their third out which created an opportunity for Ashley Derby to hit a spectacular home run that earned her team the lead for the time being.

LMC remained consistent until fly balls gave Lassen an opportunity to capitalize on those missed catches to get five of their base runners home.

Lassen led 6-3 in the sixth inning until they managed to earn a couple more runs near the end of the exhibition to win 8-3. In the second outing, the Mustangs improved their offense but still lost 8-5. Head Coach Tim Rognlien attributes the loss to inconsistent application of skills.

“If you can’t catch and you can’t throw it to get the out you’re going to wind up getting beat” said, Rognlien.

Despite the loss, team spirit remains high and they will be ready to face Solano Community College Tues., March 13 in their home territory.

“We all worked together to put each other on base and keep each other’s spirits high” said teammate Ashley Derby.