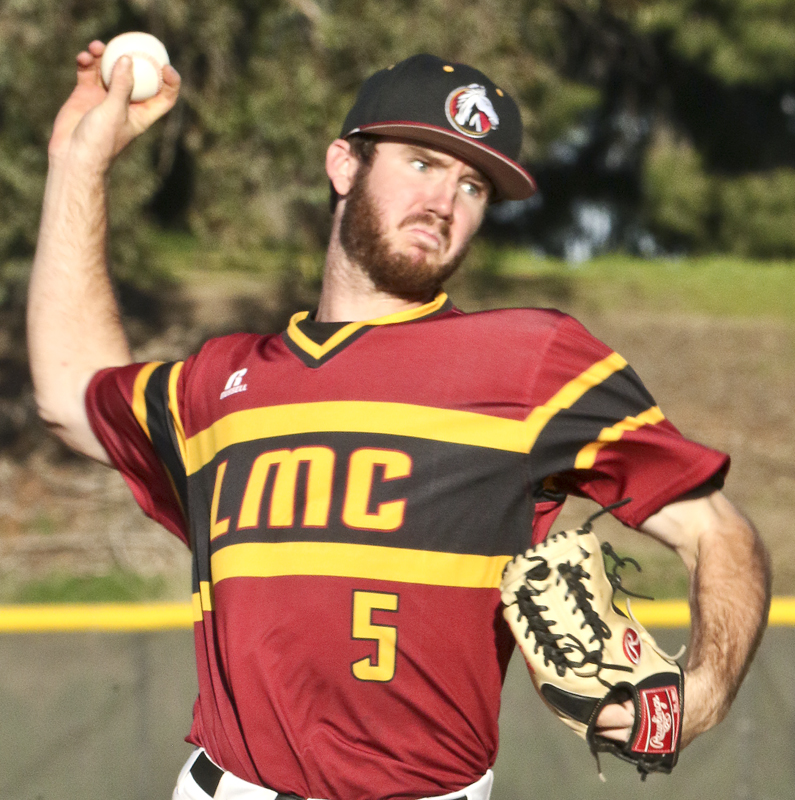 Riley Cleary reers back to throw a pitch against Fresno City.

Los Medanos College slugger Riley Cleary has been one of the Mustangs’ key players during his tenure. And soon, San Francisco State University will be his new home after the spring semester.

For the sophomore utility player, the grind never stopped, even when the resources weren’t there.

Growing up in Antioch, Cleary was not fortunate enough to have some of the valuable assets a developing player needed — such as trainer or top tier developmental programs — which often led him to work out by himself.

Cleary developed on his own. Often times, he set out unaccompanied to the now defunct Babe Ruth baseball fields in Antioch, taking countless swings after swings off the tee. And if not journeying to the Babe Ruth field, Cleary would put in work and hit off the tee in his backyard.

All with hopes and dreams of one day living a lavish life.

“It just motivated me. Knowing that there will always be people more fortunate in life with money, resources, and opportunity makes me want to work hard,” Cleary said. “It taught me to not take anything for granted and to strive for greatness even under difficult circumstances.”

As time progressed, Cleary continued to stand out in the eyes of many coaches, especially during his time at Antioch High School where he played on a struggling Panthers team.

Even despite the fact Antioch only maintained a 5-15 combined league record during his junior and senior year of high school, Cleary was still able to put up some of the best numbers on the team. His senior year he had two homeruns and the highest batting average (.483) in the entire Bay Valley Athletic League, an improvement from his junior year where he averaged .279.

He left many of his coaches impressed, one of them being Antioch’s assistant coach Aaron Miles, a former eight-year MLB veteran where he captured a World Series title in 2006 with the St. Louis Cardinals.

“He was definitely one of the best players on the team,” said Miles. “He had the ability to be the shortstop. He batted leadoff, second most of the year. He could play at high level of college.”

But now, Cleary is known he’s he best of both worlds, player that excels both batting and pitching.

“Usually your best players can do it all. It’s not rare to see him do that. He is one of the best athletes.” Miles said.

His numbers certainly turned a lot of heads, and one of them was his current LMC head coach Anthony D’Albora, who said that Cleary was a great fit to play for the Mustangs.

“He played a few different positions in high school including infield, outfield as well as pitching,” D’Albora said.  “We saw right away how athletic he was and knew he would fit in to what we are trying to do on both sides of the ball.”

Cleary said transitioning from Antioch to LMC was like day and night. He saw a huge culture change between the two programs, and how everyone on the LMC team was serious about playing the game. He took this game as a job, and always worked with his teammates and coaching staff to improve himself.

“Coach D’albora works extremely hard to move all his players on. We do a lot of filming of offense, defense and pitching. Everyone, even those with minimal playtime, has a good opportunity to move on,” Cleary said adding, “For me I had a really good freshman year. I got second team as a pitcher, which was a real good boost on my resume. We have a lot of talent on the roster and Coach D works hours on end to assure that everyone gets a chance to move on to a four year.”

As of Wednesday, Feb. 21 Cleary has a batting average of .349 with three RBIs. He and the entire Mustangs team hope to have a strong season, and a run in the playoffs.

But all things must come to an end, Cleary will finish his career at LMC at the end of the spring semester, but is eager to begin his new journey at SFSU.

“As opposed to going with the most money, or the place with the best facility. I picked SFSU because it reminds me a lot of how I was raised,” Cleary said. “It’s a small market team that doesn’t get a ton of top tier recruits like most other D1’s and D2’s get. The team is filled with a lot of grinders, who really get after it on and off the field. It’s something that I really wanted to surround myself with.”