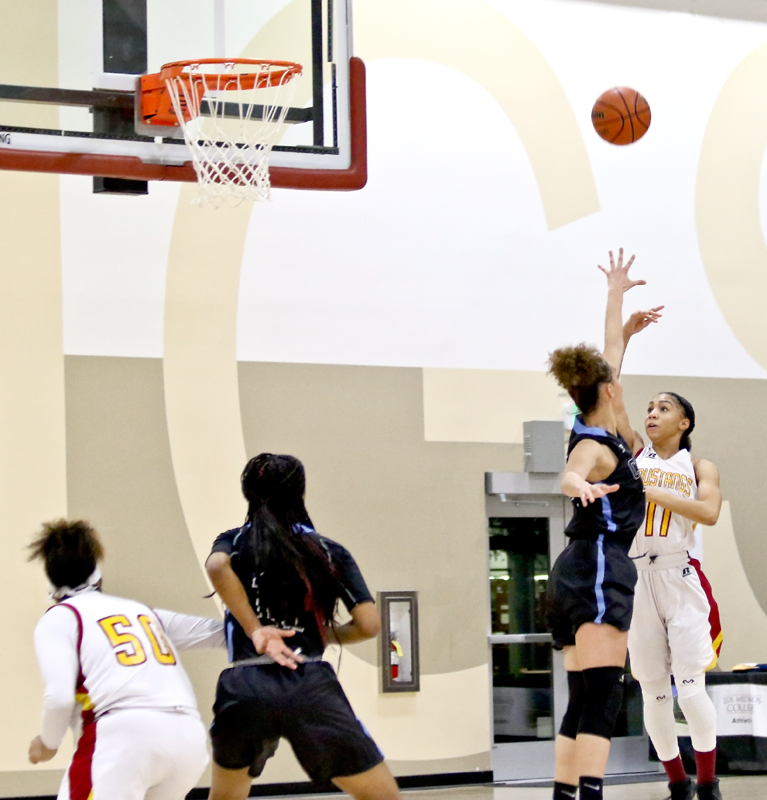 Los Medanos College women’s basketball jumped out to an early lead in their game against Contra Costa College Friday, Jan. 26 and never gave it up.

The final score between the Mustangs and the Comets was 86-39, despite LMC only having one player on the bench.

CCC put up a fight in the first quarter of the game, scoring a total of 11 points, but could not keep up with LMC who landed four 3-pointers, six free-throws and three 2-point shots.

In the beginning of the second quarter, the Mustangs shallow roster began to show. The team was beginning to look tired.

“We never planned to have a shallow roster but unfortunate situations happen,” said Jayden Tolentino. “There are obvious disadvantage to only have six players, but our team chemistry is like no other.” Villegas added  that part of the team’s strategy involves putting enough pressure on the other team to get its coach to use timeouts so he doesn’t waste his.

During halftime Villegas said he talked about ball movement and told the team to focus more on defense to limit the Comets in the second half.

Danielle Daniels said the team’s defensive strategies are to stay aggressive, stay content and not to foul, which forces the team to play smart and stay communicative.

“At halftime we talked about not letting them get to 50 points and we did just that,” said Tolentino.

The second half  started well for the Mustangs, which amounted a 21-point scoring run, further solidifying the lead. The Mustangs only allowed 11 second half points, while making 18 of 21 free throws.

Adorah Buggs led the Mustangs in points in both halves of the game with 29 points in total. Buggs said the team’s focus is to both push the other team to work harder while conserving energy to last throughout the game.

The LMC Women’s Basketball team will be playing at the College of Marin on Wednesday, Jan. 31 against the 8-3 Mariners.