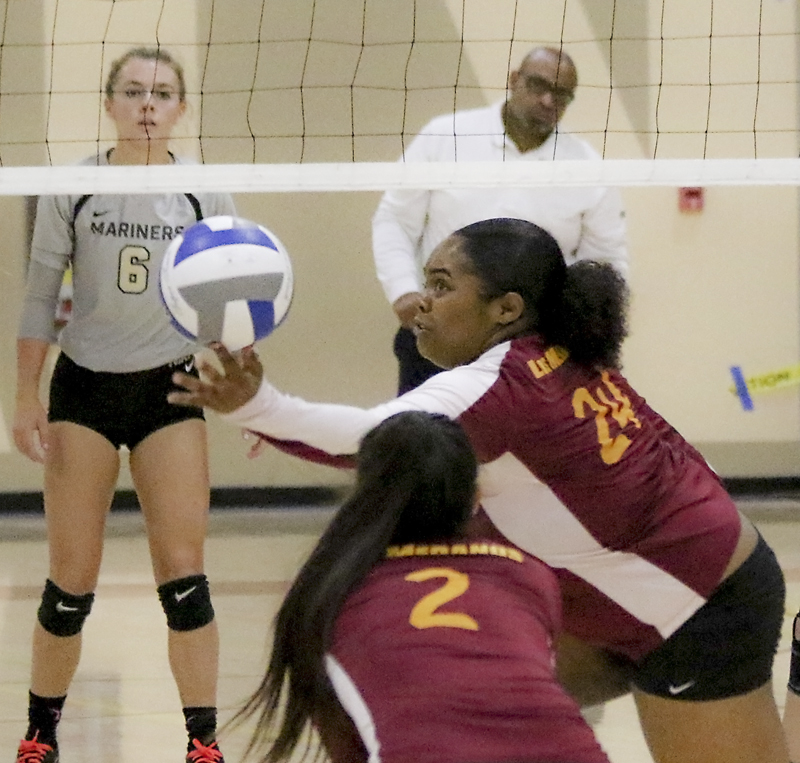 Despite Solano College breaking their eight-game winning streak, the Los Medanos College women’s volleyball team picked up where they left off by getting back into the win column after a close game against the College of Marin.

The team was looking to pick themselves back up, in order for them to stay in contention for a playoff spot. To do that, they needed to get past fourth place College of Marin Mariners. The hunt for the postseason continued for them with three games left.

The first set started off strong for the Stangs, as their solid passing and team communication was clear to see. However it wasn’t enough to easily put away Marin, as the majority of the game was a nail biting back-and-forth battle. Both sides made similar plays such as dives, balls out of bound, and miscommunication errors. At one point, the game was even at 6 a piece. But the tie wouldn’t last long as the Mustangs found composure with key plays like outside hitters Ashley Dixon finding an empty spot to tip the ball in and a Malaya Salinas kill that left the Marin defense unresponsive to recover the ball.

They founded a strong lead late in the game and more important plays like opposite hitters Ayanna Burnett and Samantha Rhodes simultaneously jumping to block the ball in mid-air to get points that would all lead to the magic number 25, for the first set win, 25-18.

With the game even at 16, clutch plays began to erupt, with setter Erica Wilder tipping the ball in an empty spot, Salinas’s and middle-hitter Nuru Boone blocking the ball, and a Rhodes quick kill. Opposite hitter Vei Finau’s kill was the last play to give them the second set win, 25-22.

The next set began with the Mustangs finding themselves in a comfortable lead, until Marin continued to find a way to tie it. Despite losing the lead, the passion and hard work wasn’t lost and stayed motivated to find a way for them to get back on top. An ace by Wilder, a block and a kill by Finau were some of the important moments the team did to get back in control and were getting closer to the win. Sure enough, a block by Wilder and Boone was the game ending play and gave Los Medanos College the win, with the final score 25-22.

“ This was a big match for us,” said head coach Lou Panzella. “They were one loss behind this for a conference playoff spot, if they would’ve beaten us it would have made our jobs even more difficult even though we don’t have a guaranteed spot in the playoffs just yet,” he said. “We just need to go out and play hard.”