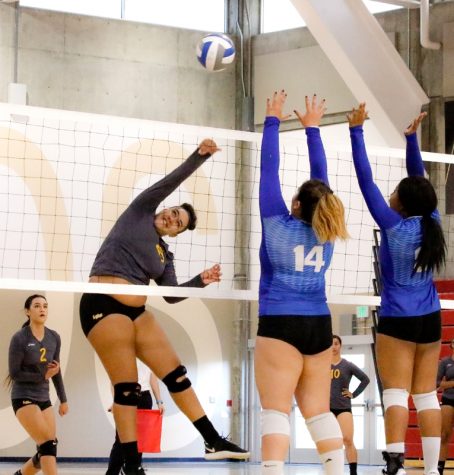 Samantha Rhodes smacks the ball over the net during LMC's game against San Mateo.

After a heart-breaking 3-0   loss to the Solano Falcons on last week, it was a tale of two games Wednesday for the Mustangs volleyball team.  Two games against two different colleges in LMC on the same day.  The LMC volleyball were looking to get back in the win column.
With their hard work and team effort they won three sets against the Shasta College Knights but lost  a close five-game set against the San Mateo Bulldogs.
Going on the first game against the Shasta College Knights, the Stangs looked determined and focused on redeeming themselves from the Solano loss that head coach Lou Panzella called
“a tough game, ” and which team “didn’t get anything going.”
The first set showed that the team had forgotten about their last game and completely dominated from the first minute until the last, winning it 25-13 with teamwork, plenty of kills that translated to points and  gave them confidence that the lead wouldn’t slip away from them.
The second set however was too close to call for both sides, a back-and-forth battle that featured dives, spikes, and errors. But through it all  the Stangs prevailed  to take the second game of the set by  27-25.
The final set against the Knights showed that the Mustangs were motivated to get this win and kept their success on repeat. Despite a few moments of miscommunication that gave Shasta points, the Stangs kept calm  and  an ace and a kill  by outside hitter Malaya Salinas, spelled the end for Shasta with the final score of 25-19.
“Anytime you win all three it’s always a good thing,” said Panzella.  “There were few scrappy moments here and there but we played hard and did a good job that got us the result we were looking for.”
However the day was far from over for the Stangs. As they faced off against the San Mateo Bulldogs of the Coast-North Conference several hours later.
In the first the Mustangs were under a lot of pressure from the Bulldogs, with their spikes being saved  miscommunication errors which costed  them to fall behind. Eventually San Mateo took the first set 25-18.
The second set almost was a repeat of the first with errors that gave the Bulldogs an early lead. However San Mateo consistently hit  balls that were out of bounds and kept serving ones that hit the net.  A moment the Stangs were yearning for finally happened after setter Erica Wilder tipped the ball into an empty spot to give the Stangs the lead. San Mateo continued to give bad serves and out of bound balls that would finally give the Mustangs a win, 25-18.
But the Bulldogs completely dominatied over LMC in the third anear repeat performance of the first set. The San Mateo Bulldogs had a counter to all of the team’s kill attempts and won the third set, 25-17.
Fortunately the Stangs continued their never-give-up attitude and got to a hot start in the beginning of the fourth set. They took an early comfortable lead with key plays like an ace by utility player Samantha Rhodes, and the defensive duo of Ashley Dixon and Vei Fianu who blocked the ball simultaneously, and resulted in a series-tying victory, 25-16.
That led to a rubber match to break the tie.  The team that could hit 15 points first would take the win. The Stangs fell to an 0-4 drought in the beginning but kept finding opportunities to get back in the leading position. Despite the Stangs efforts the San Mateo Bulldogs got the 15-13 win after an unstoppable hit.
“We fell behind early but it was a game that built characters that’ll help us on the road.”
“But it would’ve been nice to have gotten a win,” said Panzella. “
The team’s next scheduled games are against the College of Marin on Sept. 29  and Yuba College  Oct. 4, both on the road.  For more information on the LMC Women’s volleyball team visit http://www.losmedanos.edu/volleyball/.