Giants in a giant slump 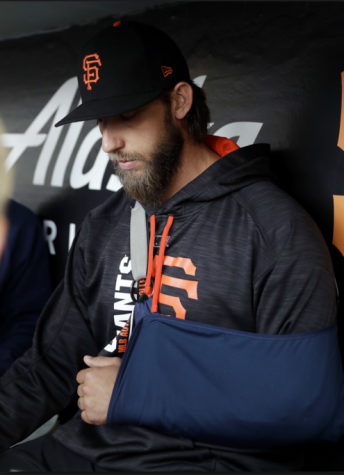 The San Francisco Giants are in the second month of the season, and earlier I predicted they would be in either of the top two spots of their division. That is not the case as the Giants are at the bottom of the NL West division with a record of 11-23.

The Giants on paper have one of the best infields in the majors, and one of the strongest starting rotations in the league but can’t string together any wins. The answer to their issues is simple, and the answer is it’s baseball. Baseball has a way of kicking people in the butt when they least expect it. For the San Francisco Giants it happens to be at the beginning of the season, and it seems as if this once hyped up season will continue to disappoint.

One of the main reasons the Giants haven’t performed well is because of the injury bug. In, the first full week of the season the Giants lost catcher Buster Posey for ten days due to a concussion. They lost Jarret Parker, and then lost Denard Span their the two starting outfielders that were supposed to control the outfield for the season,to the disabled list.

However the list doesn’t stop there, in spring training the Giants lost a key member of the bullpen in Will Smith, who is now having Tommy John surgery. To make things worse, their star shortstop Brandon Crawford, who has been out for the past two weeks with a groin injury, isn’t expected to start his rehabilitation in the Minor Leagues until this weekend. Yet the one injury that put the nail in the coffin and been the most dreadful for the Giants is the injury of Madison Bumgarner.

Bumgarner was injured in a dirt bike accident which sprained his non-throwing shoulder, in addition to bruised ribs, and is expected to miss the next 3-4 months due to that injury. He has come out and apologized for the incident, but since then the Giants starting rotation has been in shambles.

Recently, on Tuesday May 9th it was announced that new closer Mark Melancon was placed on the 10 day disabled list with a forearm strain.

So many injuries in such a short period in time have really set the Giants back in their goals.

Looking away from the injury bug the next big aspect that has continued to bring the Giants down is their offense. They haven’t been able to score runs in Colorado, Cincinnati, and now in New York, and all the cities that were mentioned are known for being hitter’s ballparks. I may be stretching the Mets ball park (Citi Field) as a hitters park but it’s a park that yields a lot of runs, and so does Coors Field and Great American Ballpark, but the Giants haven’t scored any runs.

On Tuesday night, it was more of the same; the Giants couldn’t score runs as they lost to the Mets 6-1. The only run the Giants could get was a Buster Posey solo home run. This year it seems as if Buster Posey is going on a tear by hitting the cover off the ball, but the other guys around him can’t get on base for him to score them.

Baseball is a team game and Posey does all he can to get on base, and to make sure that the next guy can score him. But the Giants offense ranks at the bottom of the league in batting average, extra base hits including home runs, and runs batted in. The Giant’s offense  has been horrible.

The Giants had many opportunities to sign a power bat to put in the middle of the line-up but they didn’t do it. Buster Posey is not a power hitter; he’s a great hitter but not a power hitter. Hunter Pence is a great hitter but the power that he had two years ago is not there, and the other guy that can be considered a power hitter is Brandon Belt, but hasn’t hit over 20 homers yet in his career. Now their next opportunity to improve the offense is in the next two months is to find a trade, if they want to stay alive in the NL West.

Now what’s the solution to this struggle?

The next problem that has been with the Giants is the pitching. With the Giants you wouldn’t expect them to have problems with their rotation or bullpen. However, no run support on the offensive side has pushed the starters to their limit to keep the Giants in ball games. Johnny Cueto, Jeff Samardzija, Matt Moore, Matt Cain, and now Ty Blach have all pitched great games but they can’t pitch nine innings every time.

It seems the same problem from last year has followed into this year. The bullpen can’t hold a lead to get the closer in the ninth or hold the lead for the Giants to get the win. A bullpen with Mark Melancon, Hunter Strickland, and Steve Okert should be fine, but the other half hasn’t been able to get them into ballgames because the lead is already lost at that point.

The bullpen has looked better in the past few weeks. In a game against the Mets Samardzija pitched seven great innings, nine strikeouts, but gave up 5 earned runs, and the bullpen couldn’t hold the score enough and they ended up losing the game 6-1.

It’s really hard to watch, because the Giants are a team that’s supposed to be challenging for a first-place finish and to go deep in the playoffs.

It’s been hard to ignore the negatives, but there are some positive aspects of the squad.

First, the Giants brought up their number one prospect Christian Arroyo, who has hit the scene by storm and brought a new energy to the clubhouse. Then there is Buster Posey who is fourth in the lead in batting average and his on a hot streak at the plate. Johnny Cueto looks like master on the mound carving hitters back and forth. That’s only a few positives, but they are some to build off.

People have been saying, it’s still early in the season, and it’s too early to tell where the Giants will finish. No it’s not early anymore. Early is April and the Giants are now in May and are 11-23 that’s 34 games into the season. With only two months until the all-star break the Giants are going to have to win 12 games to get over  a .500 winning percentage, and in baseball it’s hard.

Now Giants fans don’t lose faith. I am only stating what has happened over the past two months of the season. Injuries have hit them hard, and once the main pieces come back together, the more they play as a full team, the more improvement us as fans may see.

Keep watching, and don’t stop believing, the game of baseball has it ways with teams, and it’s only a matter of time before the Giants do find their stride. Remember it’s just a game, and they’re professionals, as fans all we can do is wait and see. My prediction at the beginning of the season may have taken a turn, but the game is still fun to watch, and it’ll be exciting to see what the Giants are capable of in the coming months.