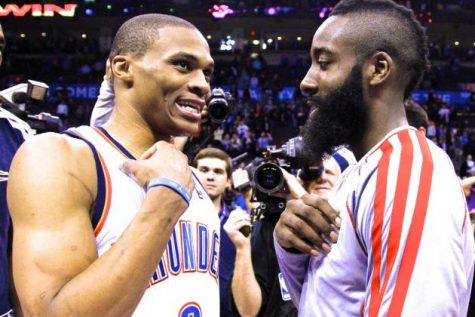 A year after there was no debate about who should be MVP, at least amongst the voters who gave Stephen Curry the award unanimously, this year’s discussion is much different. This year the top two candidates are Oklahoma City Thunder guard Russell Westbrook and Houston Rockets’ guard James Harden.

The case for Westbrook is driven by the fact he conquered the 55-year old record of the most triple-doubles in one season, set by Oscar Robertson in the 1961-62 NBA season. Westbrook has made the triple-double look routine, snagging 42, during an era where no player has had more than 20 since the 1973-74 season.

His dominance on the hardwood however has only propelled the Thunder to the sixth seed in the playoff, and if seven of the team’s wins were losses instead, they would be out of the postseason entirely.

The case for Harden, better known as the beard, is driven by his own triple doubles as he achieved 21, while also leading the Rockets as a team to shatter the record for most three-pointers made in one season. He has led Houston to the third seed in the playoffs, a year after one less win would have kept them out of the postseason.  Harden is not being held back by his own accord, but rather Westbrook’s unprecedented feat. But Harden argues winning is what he thought should be the most important factor for the award. But Harden seems to forget what the “V” in MVP stands for.

MVP does not denote the best player in the league, but rather the player who’s worth would cause a team to crumble if he were not there. Harden certainly helped break the record for most three pointers, but it was a team effort, without him they would have still managed to be a solid team.

But without Westbrook, the Thunder slip out of playoff contention, and likely win about 30 or so games. He has willed them to multiple victories, taking over games when the team needs him, en route to the NBA scoring title being only the second player to average a triple double for a season.

Oscar Robertson’s record was believed to be untouchable, and for Westbrook to become the leader of the team in the fashion he did speak volumes. Westbrook had been counted out by many, and expected to be unable to carry the Thunder especially after Kevin Durant fled the team for Golden State this past summer.

You cannot deny Westbrook as an underachiever, or one with a lack of motivation. To achieve 42 triple doubles requires excellence for the full 48 minutes of a game, on both sides of the ball. Westbrook did his fair share of scoring, but also was not selfish to the point where he could not dish out assists to his teammates, while also working on defense to secure rebounds for his team.

Harden is continually known as one of the worst defenders in the league, showing little effort on the defensive side of the ball.

Harden was quoted as saying “I know I’ve done enough.” He has done enough for most years to receive the award. But this is not just any year; this is the year of Russell Westbrook.