Volleyball at top of division, 8-1 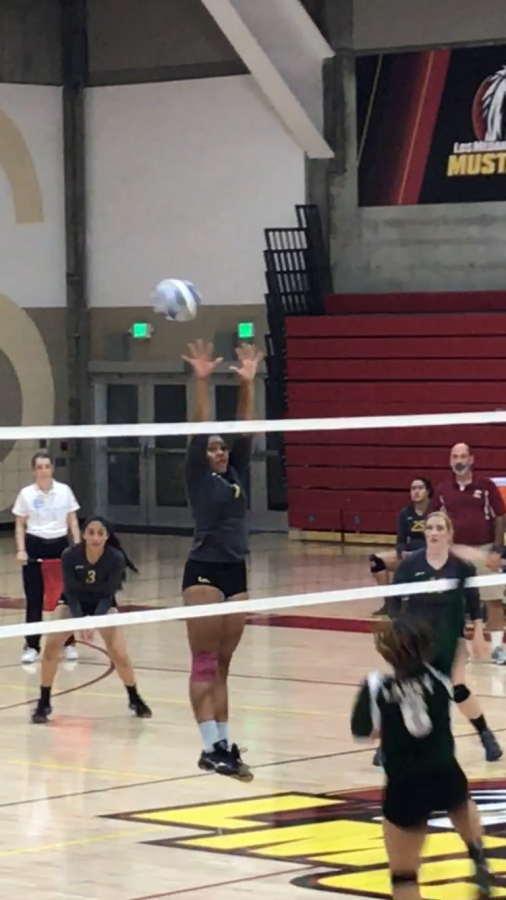 Ayana Burnett goes for a block.

The Los Medanos College volleyball team took on Laney on Wednesday and swept them easily 3-0. This victory brings the Stangs closer to an overall record of 5.00 as they currently sit at 11-12.

Their conference record of 8-1 is tops in the conference and has them primed for a playoff run.The home decimation of Laney also improves their home record to a perfect 5-0.

LMC’s Vei Finau let both teams in kills with 17. Ten more than every play on Laney combined.

Erica Wilder led LMC with staggering 32 aces, which five times more than everyone on Laney combined.

The first set ended in a 25-11 victory for LMC. While winning a set by ten plus points is nothing the sneeze at, head coach Lou Panzella encouraged his team to not let up.

Between the first and second sets Panzella said, “Stay focused don’t stay down play with intensity, keep your head in the game, play all out. Our goal and what we talk about is go all out and take it one point at a time.” “Give everything you got all out every ball every play,” stressed Panzella. He also explained that early on his team “[was] a little bit not clicking on all cylinders”.

The second set ended almost exactly how the first did. With a 25-13 Mustang win.

In what would end up being the final set, LMC dominated with and impressive 25-9 victory.

After the match Panzella shared his thoughts on how the team performed.

“I thought that we did a good job of maintaining and not losing focus. Laney struggled a little tonight and sometimes when you play a team that you’ve played before it’s hard to maintain your focus,” said Panzella.

LMC will take on Contra Costa for their next game on Nov 4. For more information on LMC volleyball visit http://www.losmedanos.edu/volleyball/