Softball end of the year banquet 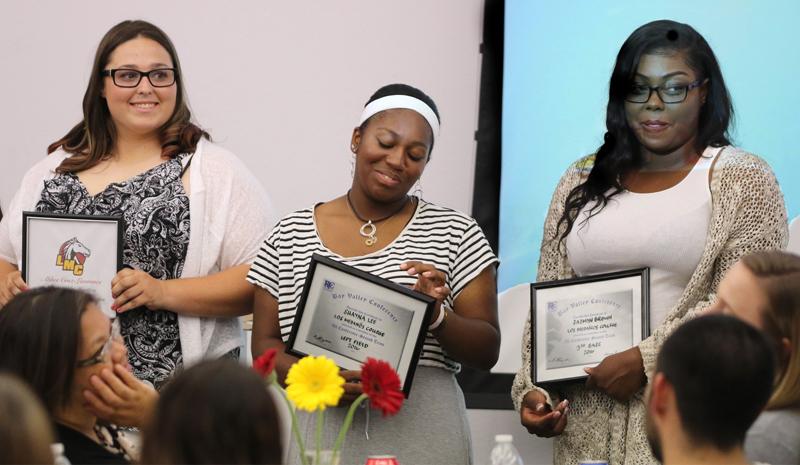 The Los Medanos College softball team officially wrapped up its season at the annual 2016 Softball Banquet Tuesday night honoring players for accomplishments both on and off the field.

Athletic Director Richard Villegas opened remarks with praise for Coach Tim Rognlien. “I hired him last year when our softball team was in a crisis. It was one of the best hires I have made,” said Villegas, who gave Rognlien credit for turning the softball program around this year with a 14 and 10 conference record and 15 and 7 overall.

Rognlien himself gave a lot of credit to the team for being so versatile and ready to accept any challenge put before them.

“ It’s not easy forming a team. It’s kind of like a puzzle that we have to put together,” said Rognlien, adding that players were in positions they never played before and did the job.

Villegas also praised the commitment of the team members.

“You are doing the job not only on the field, but in the classroom,” he said addressing the players and the audience. “They are practicing every day and may have part-time jobs at night. So I know there is a lot on their plate. So I want to acknowledge your hard work and your commitment and your sacrifices that you make for the program.”

The night’s honors started out with all state academic awards for the highest grade point average. To win this award, players had to have played for two seasons and maintained a 3.5 or higher GPA.

Jenna Leavitt, Crystal Hicks and Lyrica Langlois from last year’s team were honored belatedly. Receiving all state academic awards this year were Renee Smith, who has a 3.67 GPA, and Brittni Brown with a 3.88 GPA.

The Bay Valley Award is voted on by the coaches in the league, and First Team honors are difficult to win yet the LMC softball team had two unanimous recipients: Jayla Allen and Brown. Allen took first team honors with 6 homeruns, a 439 batting average and 131 outs. Brown took first team catcher, with a batting average of 524 and 30 RBIs. She only struck out 6 times while at bat 73 times.

Both Allen and Brown were nominated for the Northern California team and also for the state of California.

This evening of camaraderie and recognition ended with a rousing “Go Warriors,” from Rognlien.