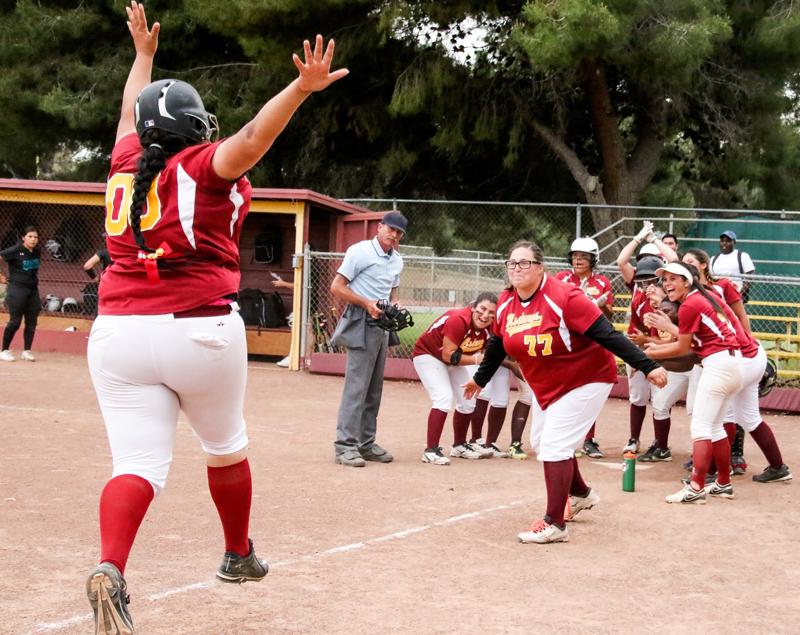 LMC Player Jayla Allen heads toward home plate after hitting a home run during the women’s softball game against Folsom Lake College on April 19, 2016 at LMC Pittsburg, CA. Her excited teammates are waiting to congratulate her.

The Los Medanos College softball team took on Folsom College in a double header that resulted in two close victories for the Mustangs.

Abbee Cruz-Lawrence started out strong in the first game pitching strikes and allowing the Stang defense to produce outs for a quick 1-2-3 in the top of the first inning.

Folsom quickly jumped on the horse and lead LMC 1-2 in the third inning as their bats started to catch onto Cruz-Lawrence’s dynamics. The Falcons didn’t stop there as they continued to tack on the runs, making the game 1-7 by the fourth inning.

The Mustangs showed signs of life their next time up to bat in the bottom of the fourth with first baseman Jayla Allen blasting a homerun over the right center fence, making it a 3-7 ball game. Following Allen would be pitcher and designated hitter Julie Lopez with a single to find her way to first base, however the side would be retired in an attempt to get Lopez home.

The top of the fifth inning saw LMC give up another to runs, stretching the gap 3-9. The light bulb turned on in Los Medanos’ dugout as the bats finally began to heat up.

After Folsom walked Allen, Lopez found her way once again to first base on a single, and the Stang Stampede began to rally. Third baseman Jazmyne Brown brought in both runners making it a 7-9 game.

The sixth inning saw LMC finally clamp down on defense by producing three consecutive outs giving them the opportunity to tie up the game in the bottom of the sixth where Lopez would have another RBI single to bring in two runners, 9-9.

The game extended into extra innings as Folsom led 9-10 in the top of the eighth, but Allen would have another homerun tying up the game once again 10-10.

Bottom of the ninth, outfielder Shayna Lee came clutch and launched a ball into the outfield allowing two runners to score on a walk-off win 12-10.

The second game would be just as nerve wracking as the first. Starting pitcher Julie Lopez produced ground balls and pop flies for the defense and got a quick three outs in the first inning.

Bottom of the second inning third baseman Jazmyne Brown followed her best friend and sent a bomb over right center fence with a solo homerun, 1-0. Outfielder Desiree Chavarria would be the second run of the inning as she was able to steal home on a wild throw.

Top of the fourth inning the Stangs defense seemed to be tired as Folsom jumped on the board scoring five consecutive runs, 2-5.

Bottom of the fifth inning, LMC crawled back into a close game scoring two, 4-5.

Top of the seventh inning worried Los Medanos as the Falcons inched away from the close game scoring another, 4-6.

Bottom of the seventh inning, two outs, and runners on first and third, Folsom would try to walk Allen to get to the next batter. With a 3-1 count, the pitcher made a mistake by hanging a picture perfect ball on the outside corner and Allen was able to send the ball right back over the fence with a walk-off 3-run homer, ending the exciting game 7-6.

Notable accomplishments from the two games go to Allen who had three homeruns, and J. Brown who had two.