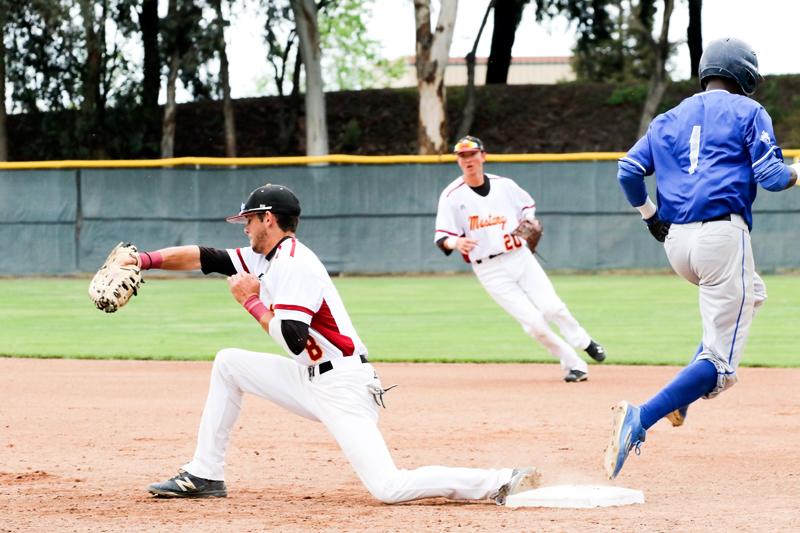 Catcher Ethan Utler started the game with a bang, sending a first inning shot over the left field fence to put the Stangs on the board with an early 1-0 lead. The Comets would answer back in the second inning when a base runner scored off of a wild pitch, tying the game 1-1.

Utler doubled during the bottom of the second, scoring outfielder Jon Allen and moving outfielder Deon White into scoring position. White would soon score off of a wild pitch, and Utler found his way home after outfielder Jared Ambuehl produced an RBI single to put LMC up 4-1.

Contra Costa attempted to answer back in the fourth inning, but only managed to score once before being silenced by Brandt and the Mustang defense.

LMC continued to tack on the runs in the bottom of the sixth.

Third baseman Tony Self started the rally with an RBI double, scoring Allen and advancing Ambuehl to third base. Outfielder Jake Hom kept the heat on CCC, knocking an RBI single that scored Ambuehl. Shortstop Jeremiah Francis made it to first off of a CCC error and Hom quickly found his way to home plate, advancing the LMC lead to 9-2. LMC’s defense put away Contra Costa for another inning to grab their bats once again.

Allen got on base again with an RBI double scoring White in the bottom of the seventh making it 10-2.

Pitcher Matt Davis came in for the top of the eighth, allowing one hit and no runs along with a strikeout. He silenced the bats of the opposing team, giving the go-ahead for LMC to continue their rampage.

White singled in the bottom of the eighth, scoring designated hitter Brandon Hutslar and sending second baseman Brandon Gazdar to second and Francis to third. Allen would once again fire up his bat and produce an RBI single, scoring Francis. Ambuehl followed Allen with a two-run RBI double, widening the LMC lead to 14-2.

The top of the ninth inning saw two more LMC pitchers. Nick Marcelli was removed after allowing three runs on one earned hit, and his replacement Austin Herrington went three up, three down.

Contra Costa’s offense produced some runs in their last at-bats, but weren’t able to produce enough to tie it up, ultimately ending the game 14-5.

The team’s bats proved stringing together good at-bats with a solid defensive wall are the keys to coming out on top.

“The offense was good, I couldn’t have asked for any more run support,” said Brandt. “My [personal] expectations for the games to come are to have better command of all my pitches and dominate low in the zone.”