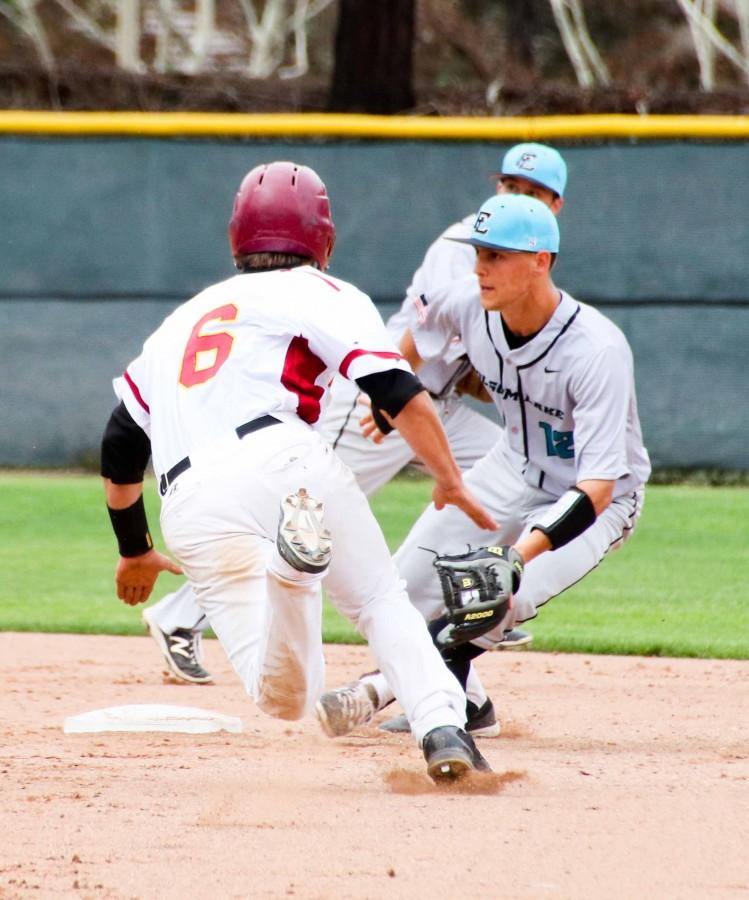 Starting off the first inning would be pitcher Jake Brandt, who currently holds a 3.62 earned run average with 27 strikeouts. With two outs, the falcons would put themselves up on the board with a solo homerun, 1-0.

The Mustangs would have their chance to answer back in the bottom of the first inning. Outfielder Jared Ambuehl would be the first base runner with a single up the middle and added a stolen base to get to second. Following close behind was third baseman Tony Self who was hit by pitch, and designated hitter Jake Hom with a single to load the bases. However, the team wouldn’t be able to capitalize and left the inning with the bases still loaded.

Brandt would hold Folsom to their 1-0 lead for a strong four innings accompanied by brilliant defensive work from the infield and outfield. In the top of the fifth, the Falcons would strike once again with back-to-back RBIs; one a double, and one a single. With the score now 4-0, only one of the runs batted in was earned.

The  Stangs would attempt to battle their way back into the game, but the bats fell silent and the team was unable to reach their way onto a base.

Top of the seventh inning would bring in a new pitcher for LMC, Jack Higgins, who holds a 4.09 ERA and five strikeouts. During that inning Folsom would have their last run of the game due to an RBI double, 5-0.

As Los Medanos was still unable to produce base runners, the team would bring in their final pitcher of the game, Austin Herrington, who has a 3.00 ERA and two strikeouts. Herrington would help produce the final outs of the defensive game for LMC.

In the end, the Mustangs 5-0 loss was something short of what the team is truly capable of showing.

“It all came down to our bats this game,” said pitcher Spencer Vincent. “Defense backed up our pitching pretty solid, the other team just capitalized when it was most needed and put a spot on the board bigger than us.”

The biggest issue of the game for the men was not being able to string quality at bats together when it was needed. The players were able to put the bat on the ball, but finding an open spot for the ball to get through or to fall in was where the team struggled.

“A lead off runner is no good unless he crosses home plate. We just needed a little momentum to get it all started and it just didn’t happen,” said Vincent.

As of March 8, the team is currently 0-2 in their conference and 6-8 overall. Drifting farther into season, the team has high hopes in showing the league their strength to power through the slump they’re currently caught in.

“I think our team is going to realize that we are a terror when we are hot and everyone is going to be addicted to destroying other teams,” said Vincent. “Best watch out for the ‘Stang Stampede’ and its route to playoffs, or better yet a championship.”