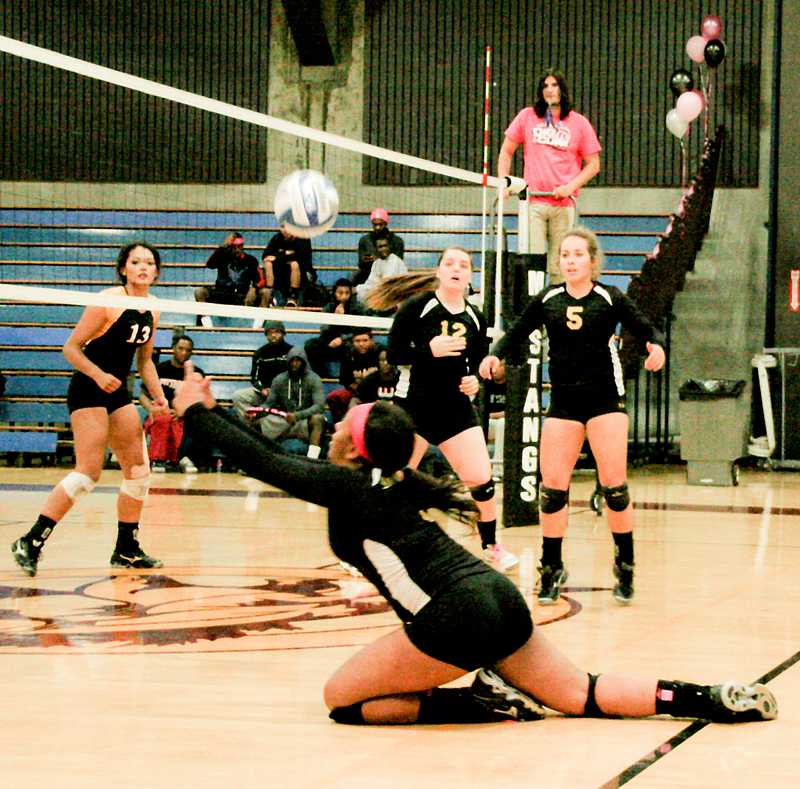 Scriven dives to make a play during an LMC game.

Los Medanos College alumni and volleyball player Taylor Scriven signed a National Collegiate Athletic Association (NCAA) division one scholarship with Alcorn State University in Lorman, Mississippi last May for a full athletic scholarship. It didn’t take long for her to shine at Alcorn. She was voted one of the captains for the Lady Braves volleyball team at the outset and started in the same position she played as an LMC Mustang; outside hitter.

“She has been a terrific leader. Her morale, her personality on the court, and leading the team in scoring,” said Copeland. “She knows how to drive the team. She picks the team up when they are down. So she has been a very terrific player and a major asset to our program.”

Scriven said she is enjoying her time at Alcorn.

“I am homesick, of course, but the people that I have met here have been so awesome and being on a new team has been a great experience,” said Scriven.

She noted that she and others arrived in the summer before classes started in the fall allowed them to become friends quickly.

“We instantly bonded,” said Scriven. “We were able to put our ideas from our different backgrounds together to make one new team.”

Scriven’s first game with the Lady Braves was in August against Houston Baptist University in Houston, Texas. Since this was her first semester away from home and her first Alcorn game, her parents Ann and Jason Scriven drove from their home in Discovery Bay to Houston to show their oldest daughter their strong support.

“We can’t not go and not watch her play with her first Division One college volleyball game,” said Jason Scriven. “So about three and a half weeks after we drove her to Mississippi to get her situated at the college, here we are back on the road on our way to her first game. Just to see her play at that level playing against some of those big name colleges is pretty cool. I think Taylor is doing phenomenally, especially with her going from a big populated city to a rural Mississippi.”

During season play in the fall, Scriven started in every game. Overall, she made 219 digs, 143 kills and held the lead in points scored. She was second in kills on her team and she racked up this record despite not playing the last game for the season due to a shoulder injury.

Alcorn volleyball team is off right now from the playing season; however, they continue to work out three times a week with a strength, agility and the conditioning coach getting our team ready for the 2016 season.

Scriven’s leadership is also evident off the court. She serves as the vice president for the Student Athletic Advisory Committee (SAAC). She also represented Alcorn State University at the Southwestern Athletic Conference (SWAC), which was held in Alabama earlier this year.

Scriven, who is majoring in Sports Psychology at Alcorn, is hopeful that one-day she will support injured players. Ironically, she is now suffering from a rotator cuff tear. She will undergo surgery while still in Mississippi in early March to repair the tear and return home to California soon after surgery. She expects to be fully recovered and start back training and playing when the Lady Braves season begins again in August.

She came to Los Medanos in 2013 and her abilities as team captain and outside hitter helped the Mustangs make their first playoff appearance in 10 years. LMC Volleyball Coach Lou Panzella sang her praises.

“Scriven’s leadership and competitive skills, her desire to get what’s needed to get it done made her the most hard working player I have ever had,” said Panzella. “I don’t know if I have ever coached a kid who was more passionate or more committed and worked as hard to be as good as she can be.”

The LMC women’s volleyball team had some tough years prior to Scriven joining them. She soon helped turn tough times into winning times as well getting the lady mustangs enough victories to get them into the playoffs at Cabrillo High School in Aptos, in 2014.

While playing for LMC, Taylor racked up some impressive achievements and statistics. She led the team in kills, digs and points scored and was second with her aces. She was first or second in almost every defensive or offensive category. At the State level, she was No. 3 in kills and points scored. To cap off her 2014-2015 season, she was voted and named co-MVP of the Bay Valley Conference by the coaches.

Scriven was pleased with her decision to continue her education at Los Medanos College after she graduated from Liberty High.

“I was just 18 and wasn’t yet sure what I wanted to do or where I wanted to go. I had hopes to receive a volleyball scholarship when I graduated from Liberty High, but that hope did not materialize. I am very thankful I listened to Coach Lou. He gave me the right advice to enroll at LMC because I now know I was not ready to go from Liberty High straight into a four year University. I view LMC as a great stepping-stone since it helped me better prepare for a four-year college. I enjoyed learning, playing and growing at LMC,” she said.

Scriven has high hopes for the future, which includes returning to Contra Costa.

“I would like to come back to LMC and work for Panzella as his assistant volleyball coach and work with him again as a club coach,” she said.

Beyond that, graduate school is a goal. She hopes one day to get her doctorate to pay it forward and help athletes like her succeed on the field and in life.