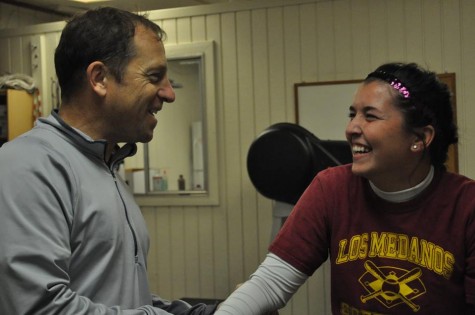 Renee SmithLos Medanos’ very own athletic trainer, Brian Powelson, took an interesting road to get to where he is today.
Raised just beyond San Francisco International Airport, Powelson decided to stay local when attempting to further his education and attended Sacramento State right out of high school.
“I was a student at Sac State and I was trying to figure out what I was going to study and I took a career assessment test and athletic training was one of the subjects that came up that matched my profile,” said Powelson.
After taking the career assessment test and being matched with athletic training, the rest was history.
“I’ve always been around athletics since I was a young kid so it seemed like a good fit. I ended up taking their care and prevention class and I enjoyed it so that’s kind of how I got started,” said Powelson. “That was probably my starting point, taking the career assessment, I did have some interest in the medical field and I was always more interested in science than I was in any other subjects.”
Studying athletic training at a school that is home to an NCAA Division 1 football team comes with perks, as Powelson recalls, “being a student at Sac State, going on trips for football games was memorable.”
After graduating college, Powelson was fortunate enough to have a string of interesting jobs, first of which was working for the Canadian football team stationed in Sacramento, The Sacramento Gold Miners.
“It was a good learning experience for me, I was pretty fortunate to get the job,” said Powelson.
While getting to work with a professional football team fresh out of college may sound like a sweet gig, it wasn’t always a walk in the park.
“The thing about those jobs is that they were six months of everyday. Ten, Eleven hour a day jobs,” recalls Powelson.
After a year traveling around Canada and working with the Gold Miners, Powelson took his talents to a different city for a different sport.
“I spent a year in the minor league baseball system,” said Powelson. “A lot of traveling, a lot of being on a bus driving around California and Oregon and Washington. It was a good experience.”
After Powelson’s time with Canadian football players and minor league baseball players, things seemed to settle down as he secured the athletic trainer position at Contra Costa Community College, a title that he had held for about 20 years.
Working at Contra Costa for that long seemed far from likely when Powelson first took over.
“I started at Contra Costa and I was just subbing for somebody and they ended up not coming back so I kind of stayed in there for a long time,” said Powelson, adding “sometimes things happen and you get opportunities to work in certain situations where things just kind of fall into your lap and you gotta take advantage of it.”
After the athletic trainer position opened up at LMC, Powelson, who is now living in Concord, saw it as a natural fit and has been an athlete’s go-to since last January.
While reflecting back, Powelson noted that to get to where you want to be is never easy, and also detailed how he overcomes adversity.
“I don’t think anything is ever smooth sailing but there were times, especially during the fall seasons when we have 3, 4, 5, maybe 6 sports going on at the same time. It’s a little bit hectic, you just gotta remember that the end of the day is going to come sooner than later so just push through and get ready for the next day,” said Powelson.
“Brian is probably one of the most patient trainers I’ve ever known,” said student athlete Renee Smith. “There is usually a lot of people inside his training room when I go in, but he makes time for everyone no matter how busy he is.”
No matter what is going on, you can always count on LMC’s very own athletic trainer to push through and get the job done.