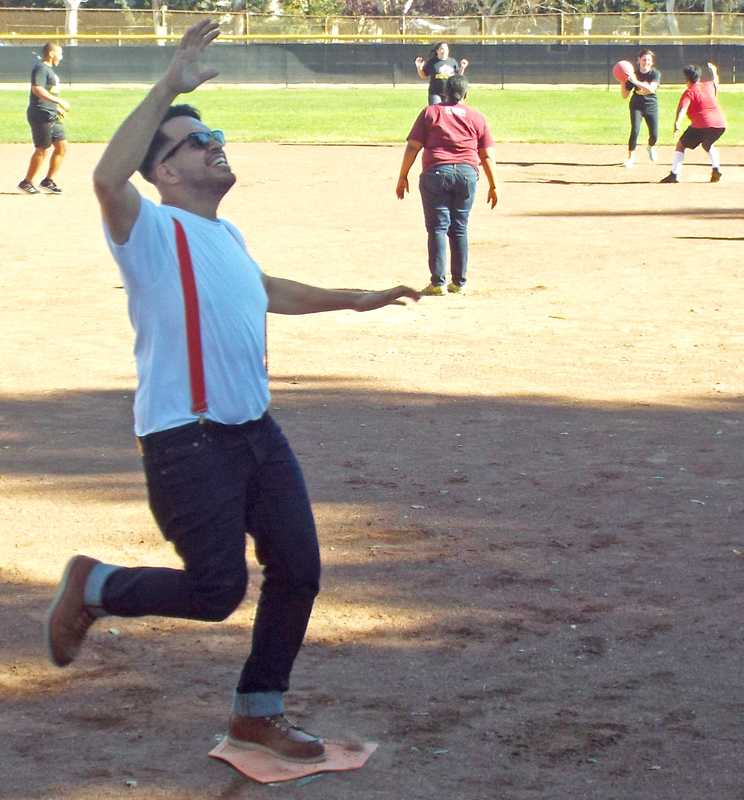 The Intramural Kickball League began at Los Medanos College with a doubleheader Wednesday, Nov. 4 in the first of a five-week tournament.
The LMC softball field was the sight for the two match ups, with the Baby Bounces and the Free Agents set to do battle first.
The wind was chilly and the energy level was mild during the first game as the Baby Bounces beat out the Free Agents by a score of 8-4.
“We did pretty good, we had some nice plays out there, you know made it happen,” said BJ Erwin, a member of the winging Baby Bounces, after the game. “It’s a team effort, there’s no I in team.”
If the energy level of the first game was a 6 out 10 then it was ratcheted up to eleven for the second game of the doubleheader.
Both the Arse Kickers and Wolf Gang were constantly yelling and rooting for their respective teammates — telling players to stay on base or to keep running along the base path — with both teams making defensive personal adjustments early on in the game.
Despite the high energy radiating from both squads, in the end Wolf Gang bested the Arse Kickers by 16 points with the crushing final score 19-3.
LMC’s intramural sports program, which is sponsored by Student Life, aims to get students, faculty members and teachers all hanging out together.
“Student life started intramural sports program in fall of 2014,” said Student Life Coordinator Demetria Lawrence. “We started with a domino tournament in the fall and then last spring we did 3 on 3 basketball.”
The matches last for 40 minutes or 7 innings, whichever comes first. The winning team of the entire tourney will win a trophy and have their names on a plaque.
The games they will be taking place every Wednesday until Dec. 2 on the softball field from 12 to 1:30 p.m.