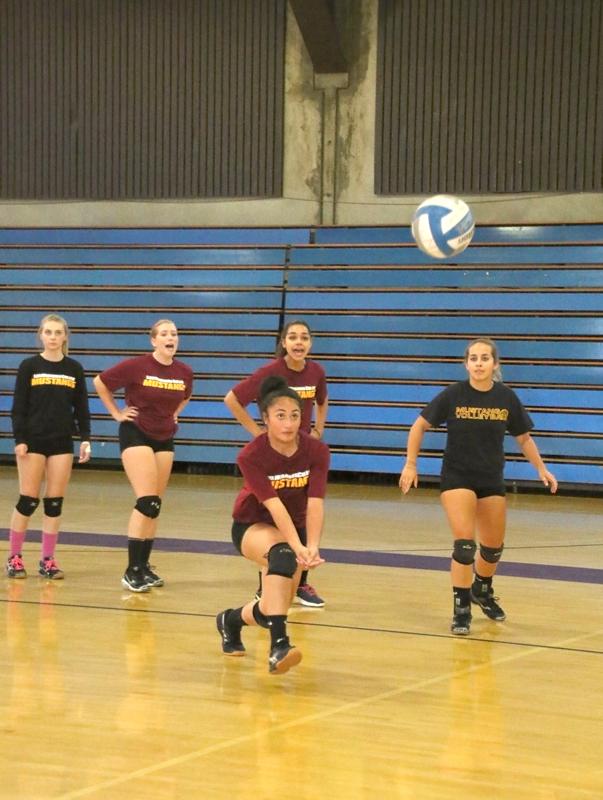 The Lady Mustangs Volleyball team took a hard hit at the beginning of their preseason. After three tournaments in a row September 2, 3 and 4, the squad walked away with 1 win in 6 games played.

“We start off really strong, but halfway through our games we fall, and we come back. It’s like a cycle that keeps on happening,” said team captain and setter Aubrey Dejesus. “Sometimes we don’t finish the play like putting a ball over the net or hitting it in. When we’re in that slump, it’s critical to our game.”

The team believes climbing up from being down will be the key factor, besides tuning in during practice, which will lead the team to see more wins.

“Performance wise we are pretty sound, but sometimes we get down and it’s hard to come back from that,” said outside hitter Caitlin Sadler. “If we can find a way to come back up during the games, all the girls know that we will be able to come out on top every time.”

Although the Mustangs did not begin on the right foot, the team took away some positives to build on toward a winning season.

“We are definitely starting to work better as a team. We can get a little inconsistent, but we can figure out how to pull through. We are getting use to each other and clicking, so we are improving as a team,” said Dejesus.

Head coach Lou Panzella also gained some great takeaways from the tournaments that put a slight blow to their early record, including being able to see the girls gel together to play as a single unit.

“I am very pleased with the effort our players put in and feel we are improving each time we play,” said Panzella. “We dug the ball really well, played really good scrambling defense and after Wednesday, served very well.”

Panzella was also able to get a first look at what the team needs to work on.

“We need to improve on our blocking and cut down on unforced errors. We need to do better at keeping the ball in play on the court and make the other team earn all of their points,” said Panzella.

“We were wild on the court,” said Sadler. “It’s so much fun playing with these girls and playing with a team you have great chemistry with. The best thing was everybody being together and coming together as a team.”