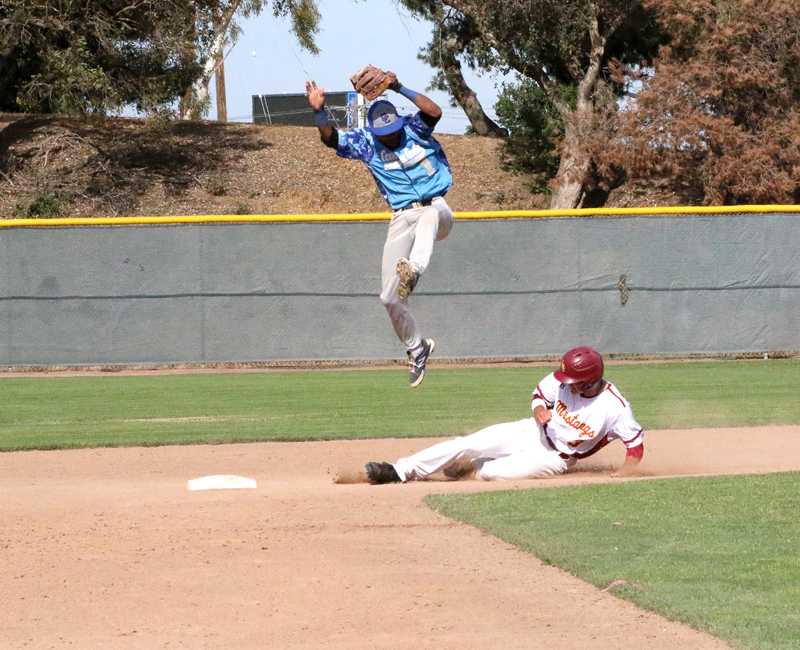 LMC’s Leonard Aue slides into second base safely as CCC’s Antonio Straughter leaps in the air and misses the out.

Los Medanos College baseball tallied a victory on the last game of the season against Contra Costa College with the ending score 10-2.

The Mustangs played efficiently on both ends against a young team in the Comets. However, CCC scored the first run of the game in the first inning.

CCC Outfielder Leander Carter got caught in between first and second base trying to steal a bag. With the Mustangs in the infield occupied by that, Outfielder Timmion Hughes was able to sneak in a run at home.

It was the last game of the season the Stangs were hungry for a win, and it showed when they rallied back four runs after allowing the Comets to score in the first inning.

LMC Outfielder Jared Ambuehl started it off by earning a hit after CCC’s defense dropped the ball. Subsequently, Ambuehl’s hit resulted into a double. Catcher Ethan Utler laid down a bunt that the Comets were unable to field, earning himself first base.

Pitcher Christian Sadler for the Comets was called for a balk, which allowed Utler and Ambuehl to both advance a base. Therefore Ambuehl quickly tied the game by advancing to home for an unearned run, with Utler now on second base.

Outfielder Jerome Hill was at bat when he got the signal from head coach Anthony D’Albora to bunt. Hill’s sacrifice bunt allowed Utler to make it to third base with another chance to score, which he did.

Infielder Ryan Welsh connected with a pitch to produce a double, giving him an RBI that brought home Utler to give LMC the lead 2-1. The Mustangs held the lead for the rest of the game.

Swinging bats produced hits for the Stangs as Outfielder Cameron Darling notched an RBI — shortly after Infielder Carlos Carrillo got an RBI as well. The score was now 4-1 with the Mustangs on top going into the second inning.

In the third inning LMC Pitcher Mike Alexander struck out all three batters and ultimately finished the game with a total of six strikeouts in six innings pitched. On offense, the Mustangs managed two more runs in the bottom of the third.

Welsh got walked and then stole second, infielder Derek Slate bunted for a single and stole second as well, and then Carrillo cracked a double to the outfield bringing in both Welsh and Slate. The Stangs now created a cushion with a 6-1 lead over the Comets.

Alexander’s pitching was a nightmare for the Comets, as they still could not score. In contrast CCC switched their pitching to Jesse Garcia who would allow four runs.

Hill hit a double off the new pitcher and later stole third base. He then got knocked in by Welsh’s single, pushing the lead even further to 7-1 at the bottom of the fourth inning.

The fifth inning was scoreless on both sides but the sixth inning showed CCC getting their second run.

CCC’s Carter earned a base hit and would then steal second. Outfielder Randy Rudulph then hit a single allowing Carter to score at home. The scoreboard now read 7-2 at the end of the sixth.

Runs weren’t scored again until the eighth inning, where LMC picked up three more that sealed the game. In the top of the ninth the Comets had one last shot but couldn’t put it together. The final score of 10-2 earned the Mustangs their 11th win in the Bay Valley Conference.

After the game D’Albora discussed the contest.

“We had a chance to win the last game of the season and that was our goal. We showed up like it was the seventh game of the World Series and you could tell they were ready,” he said. “They bought into the idea that they had one more day to play together and they really enjoyed playing hard together which was fun to watch.”

On the other hand, the Comets are still learning to play with each other and struggled a little during the game and the season.

“We made a few mistakes. We’re a young team. Most of the guys are freshmen and we’re still making freshmen mistakes,” said CCC head coach Marvin Webb.

With the win, the Mustangs managed to finish sixth in the Conference with a final record of 11-13.