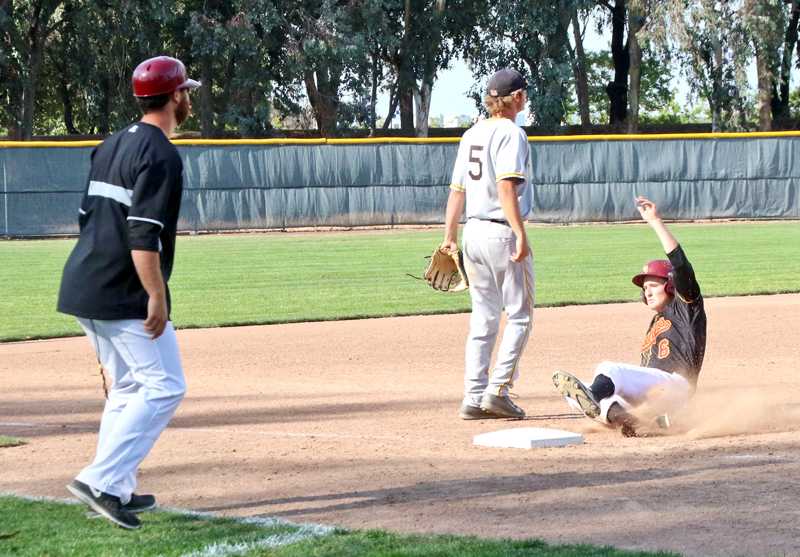 First baseman Ryan Welch slides safely into third base during the win over the College of Marin Tuesday, April 21 as Third Base Coach Brett Ringer watches the ball.

Los Medanos College narrowly defeated College of Marin 5-4 in a back-and-forth game that crept into extra innings. Both teams battled through the 15-inning game on the home field of LMC.

The first three innings went scoreless on the diamond and not until the fourth inning did the Mustangs break the drought with a run.

Jerome Hill hit for a single and then stole second base. On his way sliding into the bag, Marin’s catcher tried to throw him out but overthrew the ball into centerfield instead. Hill then quickly got up and decided to take third base off the mistake. Infielder Derek Slate grounded out shortly after but still received an RBI as Hill ran to home plate for the first run of the game.

The fifth inning was similar to the first three with no runs scored by either team, but Hill stopped playing due to some back discomfort and didn’t return the rest of the game.

Brian Womack pitched in the first six innings for LMC and got into some trouble after hitting a batter. He later allowed a single, which put men on first and third base for Marin.

Marin’s first basemen, Steven Demartini, then stepped up to the plate and cracked a double, bringing in a run that put his team on the board to tie the game up 1-1. Marin then capitalized again with a runner on third when Infielder Ryan Schalch hit an RBI, putting Marin up 2-1.

After LMC lost the lead in the sixth, the pitcher’s mound saw a change with Daniel Bodishbaugh for the Mustangs in the seventh. Bodishbaugh pitched six innings and finished with five strikeouts.

LMC quickly tied the game up in the seventh inning. Marin Pitcher Chrit Rudkin allowed one of his two walks when LMC Infielder Ryan Welsh moved to first after ball four.

Outfielder Cameron Darling laid down a sacrifice bunt to advance Welsh to second. Infielder Carlos Carrillo then hit a single and Marin got its first error off a missed throw, allowing Carrillo to move to second base and Welsh to score, tying the game up yet again 2-2.

Demartini got his second RBI of the game when he knocked in Outfielder Sam Morgan to give Marin the lead 3-2 in the top of the eighth inning. The Mustangs were unable to score a tying run at their chance at bat during the eighth but they wouldn’t let Marin score for the next six innings of the game.

LMC’s infield quickly handled Marin’s three batters in the ninth inning and only had to tally one run to tie the game up.

Marin’s Schalch went to the mound as the third pitcher for his team. LMC’s Carrillo countered with a single and later moved to second off a balk called on Schalch by the fielding umpire. Ambuehl also managed a single, giving Carrillo enough time to score at home to keep the Mustangs in the game.

Ambuehl’s RBI tied the game up but the Mustangs were unable to score again, so the game was forced into extra innings.

The efficient fielding from both teams kept each from scoring from the 10th through the 14th innings.

In the 15th inning though, the game would be finalized with LMC taking the win but not without earning it. The Mustangs gave up the fourth run off their second error of the game in the inning, putting Marin up 4-3.

Joe Firenzi was the pitcher for Marin in the 15th against the LMC batters. Ambuehl hit a single with Base runner Jacob Jones on first. LMC’s Ethan Utler hit the tying RBI to bring Jones to home plate and tie the game at 4 apiece.

Ambuehl and Utler both advanced a base off a ground out by Joey Lingenfelter, which put Ambuehl in scoring position. Firenzi then tried to intentionally walk the next batter but the misthrow allowed the ball to get behind the catcher. Ambuehl subsequently ran in for the winning run off the wild pitch, game over.

“It was a great game until that last inning. It got sloppy in the end,” said Marin head coach Steve Berringer. “And walking a guy intentionally and throwing the ball into the backstop, I mean it doesn’t get any uglier than that.”

But Berringer said both teams were just competing.

LMC’s coaching staff saw change in leadership during the game because head coach Anthony D’Albora was serving a one game suspension he received last week. So Brett Ringer made his head-coaching debut in the win against first place Marin.

“It was a tough fought battle from both teams but the biggest thing I take is that we used pretty much everyone on the team. It was a whole team effort, which was fun to watch,” said Ringer.

The game gave multiple opportunities for both teams to score in most of the extra innings, but a wild pitch sealed the fate of the athletes. LMC continued to fight back and tie the game up and ultimately got a winning run after playing a game that lasted close to six hours.

Mustangs Pitcher Nabeeh Blackburn recorded his first win on the mound after pitching from the thirteenth inning until the end of the game and finished with three strikeouts.