Mustangs edge out the 49ers

LMC wins a close one 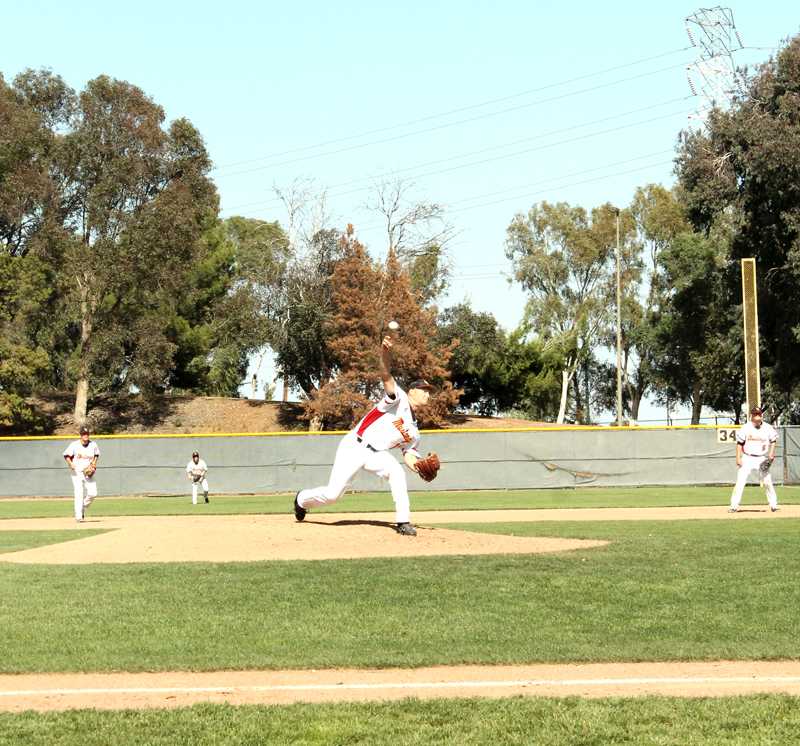 Mike Alexander pitched seven innings in a win over Yuba College and finished with six strikeouts.

A crowd of about 40 watched and cheered on both teams in a game that went down to the wire Friday, April 10 as Mustangs baseball pulled out a 9-8 win over conference opponent Yuba College.

The Los Medanos College baseball team beat the 49ers in a game where the momentum went back-and-forth. Yuba was coming off of a loss to Solano College and needed a win to keep playoff hopes alive, but the Stangs were in a similar position as both teams are sitting in the middle of the pack in the conference. The issue for both teams has been inconsistency, and LMC hasn’t been able to build momentum after wins because of it.

After the win over Yuba, LMC and Yuba players had a few choice words for one another, a sign that tensions are high because the playoffs are near.

Early in the game, the teams were neck-and-neck with a tight 3-2 score after three innings.

That all changed in the sixth inning when the Mustangs capitalized on the 49ers mistakes. Yuba committed multiple errors in the inning leading to two unearned runs in the inning and Stangs third baseman Carlos Carrillo capped it off with a two-run triple upping the lead to 7-2.

No lead was safe in this game and Yuba got back into the game when left fielder Ryan Glazner hit a home run with two men on base cutting the lead down to two in the ninth inning. This woke up the entire Yuba team and turned the momentum back in the favor of the 49ers, and they would add an unearned run later in the inning to cut the lead to one.

“The play at the end, you get a good finish by the shortstop, you get a first baseman that’s ready to finish the play, and obviously he catches it and makes the play, which is huge,” said Los Medanos Head Coach Anthony D’Albora after huddling with his team. “You got to finish games regardless how you get there.”

And he said, for the Mustangs, it’s about staying positive

“You get so caught up in one at bat and they start to come back and score a couple of runs and it’s easy to start thinking about the negative,” said D’Albora, adding that “when we had the lead early, it was free and easy.”

Yuba’s Head Coach Ryan Evangelho agreed that it was a good game despite the loss. He said they knew they were in a battle early so they were ready to go to the bullpen if necessary.

Although the game ended chippy with players from both sides of the field feeling frustrated with each other, both head coaches made it clear that there is no bad blood. It’s just that time of season where emotions are high.

“We’ve seen each other a couple of times and right now we want to win badly,” said Evangelho.

Despite the win for LMC, D’Albora said, “there were chances [where] we could’ve been better. You score early that’s great, but it’s always about the next one.”

The Mustangs followed the win up with a 7-5 win over Mendocino College. The Stangs have a 9-10 record with five games left to play.

Their next home game is Tuesday, April 21 against College of Marin at 2:30 p.m.